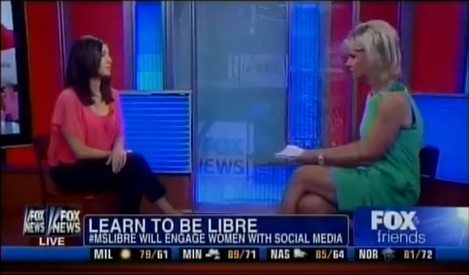 (Washington, DC) – The LIBRE Initiative (LIBRE), a non-partisan and non-profit, national grassroots organization that advocates for the principles of economic freedom in the Hispanic community, launched the women's initiative campaign "How to Raise a Little #MsLIBRE" that teaches the values of economic freedom to young girls.

Rachel Campos-Duffy, national spokesperson for LIBRE, and the #MsLIBRE campaign hosts a series of short video segments on "How to raise a little #MsLIBRE." The series provides easy and practical advice for raising and empowering the next generation of entrepreneurs and fiscally responsible girls. It's often overlooked that over 34 percent of minority owned firms are owned by Latinas. Nonetheless, children of all races and socio-economic backgrounds are losing touch with the American values of hard work and earned success. LIBRE advocates for policies that advance economic empowerment in U.S. Hispanic communities and protect the values that promote hard work and self-reliance as the path to true independence and prosperity.

"In an era of child entitlement and instant gratification, we can bring back the values that virtually guarantee girls access to the American Dream. We can't leave it to schools, media or culture to instill and nurture hard work and entrepreneurship in our children; it's ultimately our job as the main influencers of children's life. The good news is that it's not rocket science!  These are simple, easy ideas anyone can implement," said Rachel Campos-Duffy, national spokesperson for the LIBRE Initiative.

LIBRE launched the social media campaign #MsLIBRE to celebrate Hispanic women as beautiful, entrepreneurial, self-reliant and powerful as a counter campaign to President Obama's "Life of Julia" campaign- which featured a woman dependent on the government from cradle to grave. LIBRE's counter-campaign #MsLIBRE promotes female empowerment, not dependency and we strive to inform women on how teach the next generation the same values.

To view "How to raise a little #MsLIBRE" video clips click here. See Rachel Campos-Duffy on Fox and Friends talking about #MsLIBRE here.

Mega TV: Cesar Grajales Talks the Root Cause of Inflation