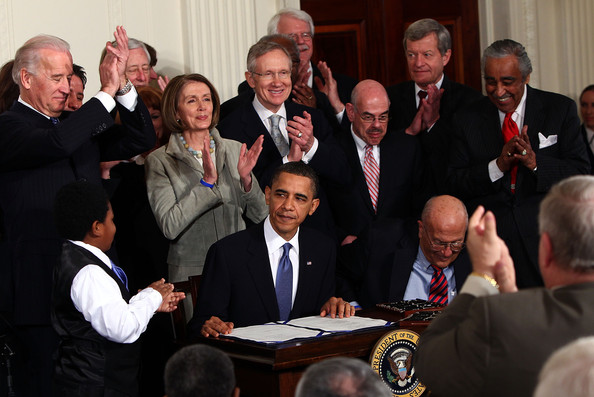 Although President Obama signed the Affordable Care Act (ACA) into law back in 2010, many major parts of it are only now taking effect. Starting October 1st, health care exchanges are scheduled to offer policies for sale. And the law calls for both an employer mandate and an individual mandate to take effect on January 1.

But while the law calls for these mandates to apply in 2014, at least one is being lifted: the Obama Administration has announced they will suspend the employer mandate until 2015. As a result, large American employers will face no penalty if they do not offer their workers affordable health insurance. The House of Representatives is expected to vote this week to approve the suspension of the employer mandate – but they will consider whether to suspend the individual mandate as well.

Even though the law was signed years ago, many Americans don’t know they face a tax penalty if they don’t buy health insurance. According to a recent Gallup poll, fully 43% of Americans are not even aware of a mandate that applies to almost all Americans.

Supporters of the Affordable Care Act say there are good reasons to force people to buy health insurance. Many young and healthy people use little health care, and they decide not to buy insurance – even though they might be able to afford it. Even worse: the law itself makes insurance more expensive for many young people. But forcing these people to buy insurance provides more money to pay for care for older and unhealthier people, who may use more care than they can afford.

How many people will be forced to purchase health insurance against their wishes? According to a new study: 13.7 million.

In other words, almost 14 million people are being forced by the government to buy insurance when they would prefer not to. The IRS will penalize them on their Taxes every year – and penalties increase over time. Without the law and the government penalty, millions of Americans would choose to spend their money on food, or educating their kids, or entertainment. They might even spend their money on things the law does not cover – like their spouses, or dental care, or a family member who is among the millions not eligible for coverage under the ACA

Is it fair to force people to purchase insurance that they believe they do not need or can’t afford? In 2007 and 2008, Barack Obama opposed a mandate. He said that fining people who don’t have health insurance was ‘not going to help them.’ He said that the problem was not that people were trying to avoid getting health care; it was that they ‘could not afford it.’ And most Americans probably agree. The vast majority of people who need insurance and can afford it, buy it. They don’t need government to force them.

That said, there are those arguing it’s a good thing that millions of people are being forced to purchase something they don’t want or can’t afford:

The GOP has been pushing for a delay of the so-called individual mandate in the wake of the Obama administration’s decision to postpone the “employer mandate” — which requires large companies to either provide their workers with health insurance or pay a fine — for a year in order to give companies more time to comply with it. “We should be thinking about giving the rest of America the same exemption that Obama last week gave businesses,” said House Speaker John Boehner (R-OH).

But the two mandates aren’t exactly comparable. While the employer mandate only affects about 10,000 American businesses and one percent of workers, the individual mandate is a far more crucial Obamacare provision. According to an Urban Institute study, repealing it would cause the uninsurance rate to be a full 50 percent higher than it would be with full Obamacare implementation — which translates to an extra 13.7 million people without insurance…

No law is perfect – and President Obama’s Affordable Care Act is no exception. There has to be a better way to improve health care than to penalize literally millions of Americans for making a choice that the government doesn’t approve. It’s simply not fair to turn them into criminals because they don’t earn enough to buy health insurance approved by the government.