Florida Says No to Corporate Welfare 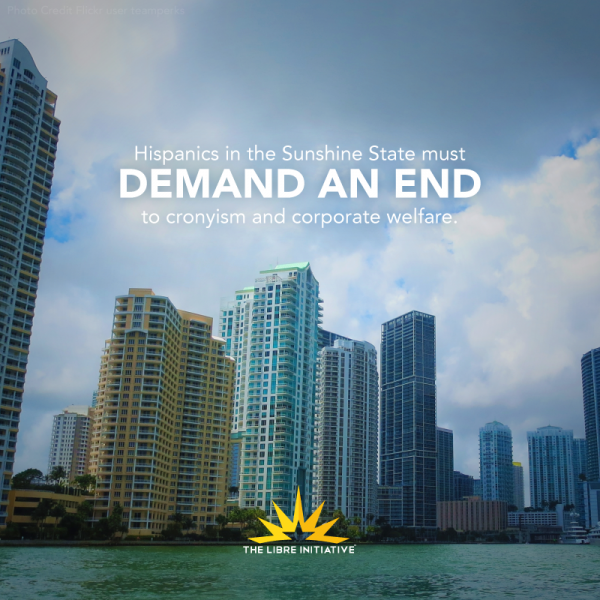 A controversial measure has failed in the Florida legislature this session, which would have distributed approximately $250 million in corporate welfare paid for by the taxpayer.

The bill, often referred to as an ‘economic incentives package,’ was pushed for months by Gov. Rick Scott among others with the stated intent of boosting the economy of the Sunshine State. However, opponents argued that the bill was a piece of crony legislation designed to benefit the politically connected few at the expense of everyone else. For Hispanic small business owners in the state of Florida, maintaining a free market where the government does not pick winners and losers is a crucial first step toward breaking down barriers to opportunity.  Now that the legislative session has ended, opponents of corporate welfare in Florida   – and those who are harmed by its negative consequences — can breathe a sigh of relief.

The House version of the spending bill, HB 1325, served as a framework to renew and expand corporate welfare incentive programs for Enterprise Florida, a public-private partnership that hands out the taxpayer funds to a few large companies. These programs disproportionately benefit large corporations and out-of-state companies instead of Florida small businesses.

According to a study by Good Jobs First, which examined corporate welfare spending in three states, Florida sends the bulk of incentives to large companies, while smaller entrepreneurial companies get comparably little. Sixty-nine percent, or $93 million, in taxpayer handouts in 2014 went to such corporations. These massive, cronyist, corporate beneficiaries have little in common with the typical Hispanic business. In fact, 90 percent of Hispanic businesses are one-person entrepreneurial outfits, a figure markedly higher than the national average.  No matter the size of their companies, these entrepreneurs contribute billions of dollars to the economy every year.

According to Chris Hudson, Florida State Director of Americans for Prosperity, advocates of corporate welfare often mischaracterize its effects on the Florida economy:

“President Obama, Governor Scott, and other proponents of handouts have a habit of cherry-picking examples of companies that took taxpayer cash and are doing ok, while ignoring the many companies that went bankrupt or provided no returns. Florida’s economy is doing great, but it’s not because of Washington or Tallahassee’s handouts to favored industries. Our low tax burden is the main reason companies and people are coming to Florida to work, build successful businesses, and achieve the American dream. The best way to keep our economy moving, and help the rest of the nation get on its feet, is to end the incentives, invest in education and other core government functions, lower the overall tax burden, and cut the regulations and mandates that are holding entrepreneurs back.”

Corporate welfare and cronyism benefit the few at the expense of the many, and reward companies for their political connections rather than the value they create for their customers in a free market. These harmful policies seriously distort the economy and create an uneven playing field, while leaving taxpayers to pick up the tab.

Making matters worse, these programs are very difficult to undo once they are in place: the select few who benefit have a strong incentive to make sure the tax dollars keep flowing, while the wider population of taxpayers who bear a smaller, dispersed share of the burden, have less of an incentive to protest. Over time, these favors to special interests expand and become more entrenched, driving a gap between the rich and the poor and creating a two-tiered society. In order to address this growing inequality, Hispanics in the Sunshine State must demand an end to cronyism and corporate welfare.