Overregulation puts the American Dream out of reach for U.S. Hispanics 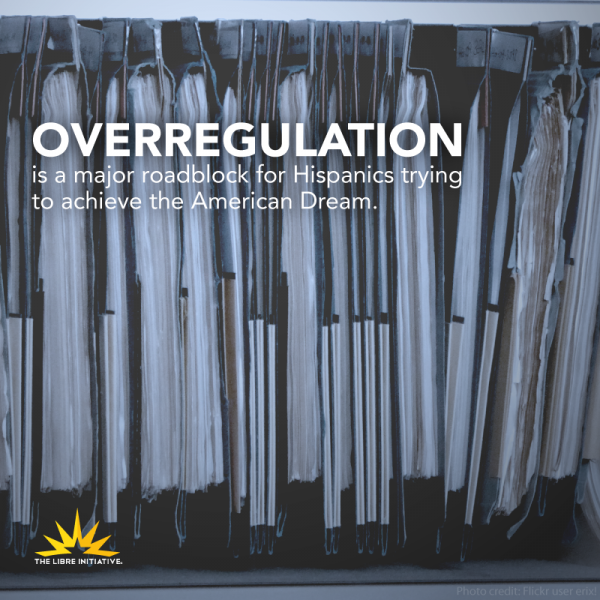 U.S. Hispanics stand out from other demographic groups is their strong belief in the American Dream – but this faith has been tested lately. The most recent financial crisis and its following economic downturn has taken a toll on Hispanics. For example, as highlighted in The LIBRE Institute’s Hispanic Worker study, before the recession Hispanics and non-Hispanics in the U.S. experienced unemployment at roughly the same rates. However, after the onset of the recession that gap increased almost tenfold. Adding insult to injury, the growth of the regulatory state presents a major roadblock for those Hispanics that are working hard to recover from the challenges of the recession and achieve their own American Dream.

At a time when the media is busy scrutinizing the economic plans of different presidential candidates, it is important to realize the harm that comes from policies that prevent us from making a living in the first place: that is, excessively burdensome and unneeded government regulations.

But just how much are regulations weighing on the American Dream? And how much are we paying to comply with them?  The Competitive Enterprise Institute (CEI) attempts to answer this question in their latest “Ten Thousand Commandments 2016” report. The report highlights the growth in the regulatory state and its approximate cost to society using government data, past reports, and contemporary studies. What they find is that the compliance cost of federal regulations amounts to a staggering $1.8 trillion annually. But when numbers are so large, people usually struggle to put them in perspective. Luckily, CEI has done the homework for us, and they took the time to present us with some facts that can help us grasp the magnitude of the regulatory state. Here are some highlights from CEI’s report:

As the report explains, if it were a country, U.S. regulation would equal the ninth-largest economy, ranking behind India and ahead of Russia.  And this ‘country’ is growing fast. In 2015, while 114 laws were enacted by Congress, a staggering 3,410 rules were issued by federal agencies. This amounts to a ratio of 30 rules for every single law enacted by our elected officials.

The impact of this growing morass of federal regulations on the typical Hispanic entrepreneur is difficult to quantify, but we can nonetheless make some relevant considerations. U.S. Hispanics are starting businesses at twice the national average. With this in mind, the CEI report highlights that 60 federal departments, agencies, and commissions have 3,297 regulatory actions at various stages of implementation, according to the fall 2015 “Regulatory Plan and the Unified Agenda of Federal Regulatory and Deregulatory Actions.” Of these, 674 affect small businesses in particular. What this means is that hundreds of additional regulations are on the horizon for the average Hispanic entrepreneur who wants to start a small business.

Another important finding of the report has to do with the price we pay for the growing number of regulations. Because somewhere down the line, we all pay the price of new regulations, either in form of higher costs when starting a business—big or small—or   through higher prices for the goods we buy.

As the authors of the report point out:

“if one assumed that all costs of federal regulation and intervention flowed all the way down to households, U.S. households would “pay” $14,842 annually on average in a regulatory hidden tax.” That payment amounts to 22 percent of the average income of $66,877 and 28 percent of the expenditure budget of $53,495.”

For Hispanic households, this ‘hidden tax’ would be even higher, at nearly 35 percent of their median household income ($42,491 in 2014). Also, as the report explains, the “tax” exceeds every item in the budget except housing. More is “spent” on embedded regulation than on health care, food, transportation, entertainment, apparel, services, and savings, according to the report. This point is key, because while some sensible and reasonable regulations might be needed in a free market economy, especially to limit instances of fraud and criminal behavior, we have to be mindful of their impact of the most disadvantaged members of our society. A $14,842 average regulatory annual tax might not be a barrier for the wealthy entrepreneur on his way to start a business or to expand an existing one, but for people with limited resources, over burdening regulations can be an insurmountable barrier to opportunity.

The bottom line is that overregulation can be thought of in many respects as a hyper-regressive tax on the American Dream which often targets the people at the very bottom of the income distribution. Policymakers should be upfront about it. And politicians asking for your vote should take heed as well. No matter what your tax plan is, if you want people to rise from poverty, let’s start with removing the barriers that prevent them from putting their talent to work.