Mass Deportation is not a “Small Government” Program 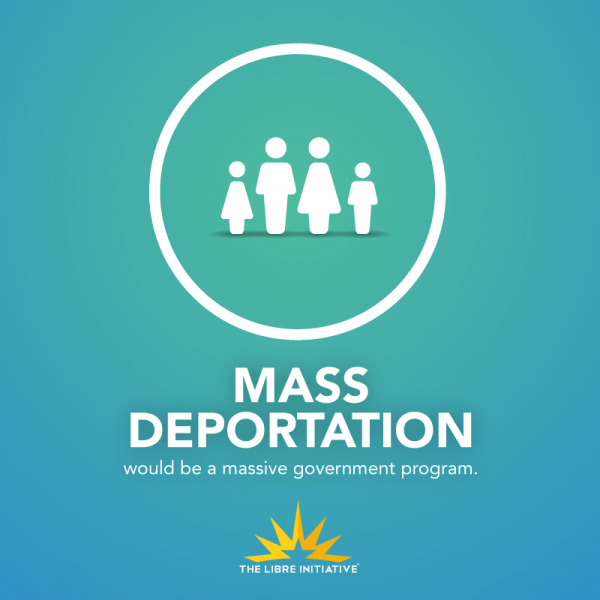 The debate over illegal immigration has taken a drastic turn in recent weeks, as some political figures not only insist that it would be a good idea to deport all unauthorized immigrants from the United States, but also boast that it would be feasible to do so in a short time span.

Interestingly enough, these policy proposals seem to most often come from those who claim to tirelessly fight for a smaller government. This is ironic, because the policy of deporting 11.3 million undocumented immigrants would drastically increase the size of government, and it would almost certainly infringe upon our personal liberties and privacy. The U.S. government needs to address the issue of immigration reform, but the solution should not intrude on the lives of law–abiding Americans, and should not impose an unwarranted cost on the taxpayers. Unfortunately, it is becoming clearer and clearer that a policy of mass deportation would do just that.

So what would be the actual economic implications of deporting all 11.3 million undocumented immigrants within two years? For one, there would be an enormous cost, all on the taxpayer’s dime. A new study projects that this endeavor could cost American taxpayers $300 billion, most of which goes towards drastically increasing government programs, staff, and materials used for deportation. The statistics are truly mind-blowing – the AAF study projects that the government would need an additional 314,000 government-run immigration detention beds, over 1,200 new government immigration courts, and over 17,000 chartered flights and 30,000 chartered bus trips each year to accomplish complete deportation of all unauthorized immigrants within this time frame.

Accomplishing this feat would also require 85,000 new positions in federal immigration apprehension personnel, 47,000 new people working in custody operations, 29,000 new criminal investigators, and 31,000 new federal attorneys to legally process the undocumented immigrants. So where we previously had about 13,000 government employees in the above positions, accomplishing a policy of mass deportation would mean almost 200,000 new government employees – all of whose salaries are paid for with taxpayer money.

Not only would this policy cost us more money through taxes, it would also take its toll on our economy. Whether or not they are here legally, unauthorized immigrants still hold vital roles in our economy, and suddenly removing them all would create a massive shock. Under this proposal, the workforce would shrink by 11 million workers in two years, and we would lose around 6.4 percent of our current labor force. Suddenly removing millions of workers from the workforce is projected to cause the economy to decline sharply, shrinking our economy by 5.7 percent in two years, or by $1.6 trillion dollars. To better understand the magnitude of this downturn, note that the decline in real GDP during the time of the Great Recession was 6.3 percent, and this economic downturn has had detrimental effects that are still felt across the country today.

Congress must work to reform our immigration system, but if we want to promote economic growth through limited government policies, we should not be supporting a program so expensive that it would take up a full 7.7 percent of our current national budget. Deporting immigrants who are living here peacefully and contributing to society should not be the highest priority for our country. Immigrants willing to work in the United States contribute greatly to our economy, and a policy of mass deportation of unauthorized immigrants is costly and unproductive. Our country must take a better approach to immigration, and must focus on realistic, market-based immigration reform that increases prosperity for all.