What Walmart Knows about Hispanics 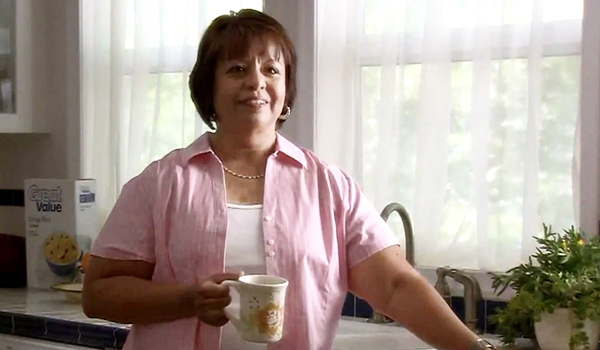 Who would have thought that a Walmart commercial could make me shed a tear and then jump out of my chair, pump my fist in the air and yell out loud “Yes”?

Well, that’s exactly what happened a couple years ago when I first saw a commercial about Noemi Flores, a middle-aged Hispanic woman who earned her 20-years-of-service badge from Walmart.

Standing in her bright, cheery kitchen holding a cup of coffee, Noemi talks about darker days in the 1980s, when she was on welfare and raising four kids on her own. Then she started working for Walmart and things in her life started turning around, she says, “almost immediately.” She proudly recounts the day she wrote a letter to the food-stamp office and told them she wouldn’t be needing their help anymore. “I knew that the more I dedicated [myself], the harder I worked, the more that it was going to benefit my family,” she says. With tears of pride in her eyes she shows us the home she bought and then introduces us to her handsome son, Mario, who now also works at Walmart. “I believe Mario is now following in my footsteps,” she proudly tells us from her front-porch steps, her arm around her son.

Noemi’s story beautifully captures the power and dignity that comes from hard work, self-reliance, and earned success. She used the government’s safety net as it was intended — as a temporary measure. Indeed, one of the least-talked-about dangers of our ever-expanding entitlement culture is that it threatens the viability of these necessary programs for those who genuinely need and use them as a bridge to a better life.

On a recent trip to Latin America, Pope Francis reminded the world that “we derive our dignity from earning our bread.”

Today, there aren’t enough voices in minority communities encouraging the kind of upward mobility and self-reliance Noemi exemplifies and Pope Francis encourages. In fact, it’s quite the opposite. In their zeal to show compassion, liberal community activists are quick to offer government handouts and, in the process, convey the message that people are incapable of making it on their own. Similarly, President Obama’s rhetoric about “fairness” and his big-government solutions to virtually every societal ill have convinced too many people that the American Dream is dead, rigged, and accessible only to the rich and well-connected. It’s a self-serving message that ensures we need big government and benevolent community organizers to get through life. Case in point: Julia, the infamously helpless character dreamed up by the Obama campaign who needs government at every turn.

Poll after poll bears out that Hispanics think Democrats care more. Never mind that in the Obama economy more Hispanics are out of work and a million more are living in poverty than when he first took office. The fact that liberal policies rarely lead to the upward mobility and prosperity Hispanics desire doesn’t matter when liberal voices like La Raza and other Obama-aligned progressive community organizations are the only voices speaking in those communities.

There is one organization, however — the LIBRE Initiative — that is finally challenging progressive dominance in Hispanic communities. LIBRE’s mission is to remind Hispanics that they have what it takes to achieve the American dream: a remarkable work ethic and an entrepreneurial spirit (Hispanics start businesses at three times the national average). Part of the organization’s strategy is to showcase American dreams being realized every day by Hispanic families, reminding communities that in America, “all you need is God, good credit, and the freedom to work,” as one Mexican immigrant, Mr. Garza Sr., memorably sums it up in one of LIBRE’s videos.

Indeed, as Noemi’s story shows, the American dream especially resonates with Hispanics because our hopes and aspirations are still so fresh and the stories of achievement are not three or four generations removed. We can easily see in our own communities what happens to those families who chose the promise of a government check and wound up with diminished dreams, as opposed to families like Noemi’s who chose liberty and hard work, and created their own destiny.

As the tremendous influence of Hispanics in the United States continues to grow, politicians and marketers alike are clamoring to answer the question, “What do Hispanics want?” Wal-Mart figured it out — it’s the American Dream. And the LIBRE Initiative is fighting every day to convince them that it’s still alive.

— Rachel Campos-Duffy is an author, pundit, and mother of six. She is the national spokesperson for the LIBRE Initiative, an organization that promotes economic liberty, empowerment, and opportunity for Hispanics.