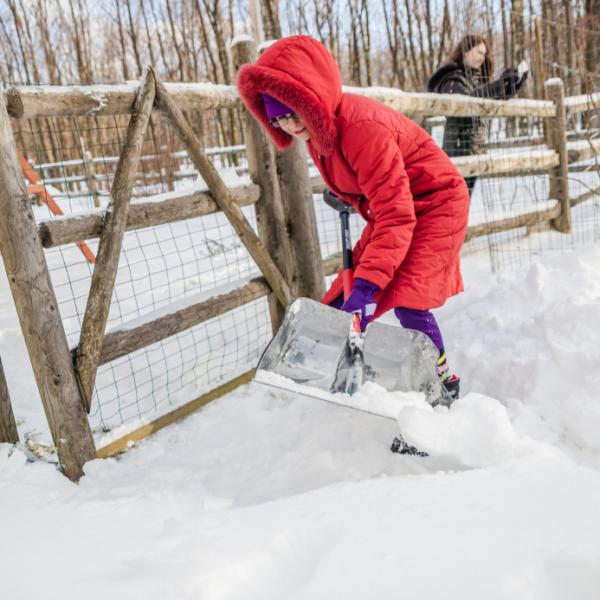 As snow and cold weather pound the east coast of the United States this week, many communities are banding together to help their friends and neighbors through the difficult conditions. In New Jersey, two young men in the town of Bound Brook came up with an enterprising idea to do just that. Last Monday evening, Matt Molinari and Eric Schnepf went door to door offering to clear their neighbors’ driveways of snow. In the process, the two high school seniors hoped to earn a little spending money.

According to local Police Chief Michael Jannone, citizens of Bound Brook must purchase a government-issued license to solicit business of this kind, a policy that has left many members of the community incredulous.

“Are you kidding me? Our generation does nothing but complain about his generation being lazy and not working for their money,” writes one resident on a popular Bound Brook Facebook page. “Here’s a couple kids who take the time to print up flyers, walk door to door in the snow, and then shovel snow for some spending money. And someone calls the cops and they’re told to stop?”

To purchase the required licenses to operate their “˜business’, the two boys would have had to pay up to $450 to the city, a sum which would have prevented their fledgling operation from ever getting off the ground. Though they managed to get five jobs by the end of the next day, they were barely able to earn $40 per house, leaving them well short of this barrier to entry.

While this story may not make national headlines, there are important lessons to be learned.

Banning door to door solicitation of snow shoveling services may not have a major impact on the economy, but it is the tip of a much larger problem facing the United States. The market is over-regulated and over-licensed, leading to a rising cost of doing business that has made it harder to achieve the American dream than ever before. We may laugh when regulators in New York demand licenses for street performers in Disney costumes, but for an increasing number of American workers, occupational licensing is no joke. Approximately one in three workers in this country now require government permission to do their jobs, a phenomenon that has been shown to disproportionately affect Hispanics.

Hispanics in the United States stand to suffer the most from Washington policies that stifle business growth. Hispanic entrepreneurs start new businesses at twice the national rate, a figure which has fallen in recent years. This phenomenon is part of a worrying national trend. For the first time since the federal government began to measure the issue, American business deaths have surpassed the number of new business births.

As Jim Clifton, Chariman and CEO of Gallup, warns, “this is our most serious economic problem.”

It is the Hispanic community that relies the most on thriving small businesses in the United States, perhaps more than any other. With the Hispanic labor participation rate struggling to improve under Obama’s economic recovery, policymakers cannot afford to restrict the market any longer.

Back in Bound Brook, we see that when process supersedes purpose, the outcomes are often ridiculous. As Police Chief Jannone was quick to clarify, the original purpose of the ordinance was not to stifle young entrepreneurship. The purpose of the law was to protect against scam artists who might advertise false services to gain access to residents’ homes and prey on the vulnerable. As noble and well-intentioned as these Regulation s may be, stories like this one in Bound Brook force us to step back and consider the bigger picture. Laws should be judged on the basis of their impacts and outcomes, and not on their good intentions. Rather than blindly enforcing Regulation s and statutes that limit our ability to do business and help each other, we should consider the real cost to our economy. It is time for our elected representatives to focus on policies that get government out of the way of willing workers and entrepreneurs.