Wisconsin’s “Right to Work” Gives Workers the Right to Choose 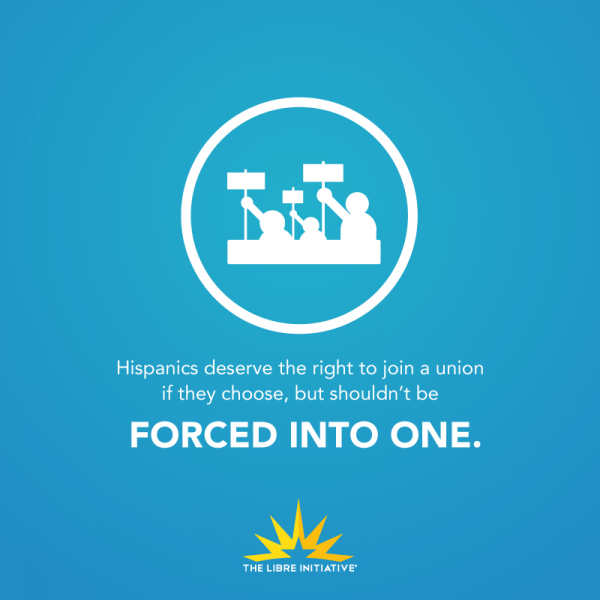 Should I join a union, or not? On March 9th, 2015, workers in Wisconsin were finally able to make that choice for themselves. On that day, Wisconsin became the 25th state to pass a Right to Work law, which allows Americans to work for a living without being forced to pay to join a union. However, almost 13 months later to the day, on April 8th, 2016, a Wisconsin circuit court judge came to the surprising conclusion that right-to-work laws were unconstitutional. The judge claimed that they amounted to – in his estimation – an unlawful taking of the unions’ property without just compensation. This decision, if upheld, will have a large effect on the Wisconsin Hispanic community.

A 2009 study done in Milwaukee shows that Hispanics saw by far the greatest job gains in the labor and service worker sectors, which are frequently unionized sectors. Wisconsin residents, including the Hispanic population, have much to gain from right-to-work laws. Twenty five other states have already upheld their legitimacy. So why the controversy over right-to-work in Wisconsin?

Most of the opposition comes from organized labor itself, who, fearing a threat to their interests, have tried to spin the narrative that right-to-work legislation harms workers. In reality, the opposite is true. Right-to-work laws do not ban unions, nor do they prevent unions from working to support their members. Instead, these laws hold unions accountable by requiring them to give workers a choice about financially supporting union efforts. In states where there are no right-to-work laws, employees are not given a say in whether or not they join a union. Those who refuse to pay union dues are consequently fired from their job – a Hobson’s choice that is really no choice at all. No voice is given to those who do not feel like they are benefiting from union representation, or to those who do not support the positions and political activities of their union.

Most Americans recognize the inherent unfairness of forcing people to choose between unemployment and paying union dues. And despite organized labor’s best efforts, unions have not yet been successful in convincing people otherwise. Employees do not want to be coerced into joining a union, and this is reflected in the numbers – a full 71 percent of Americans support and would vote for right-to-work laws, and 82 percent of Americans agree that “no American should be required to join any private organization, like a labor union, against his will.”

These strongly supportive results have been replicated even in the labor stronghold of Wisconsin. A poll conducted in the city asked if the participant approved of labor unions, and unsurprisingly, 58.2 percent of those surveyed in Wisconsin agreed that they supported labor unions. In the very same poll, participants were asked if they would support a right-to-work law, and a full 62 percent would vote for a right-to-work law, with 77 percent in agreement with the quoted statement above. Supporting right-to-work does not make someone anti-union, and even a state with strong union ties realizes the importance of increasing workplace freedom.

Those who live in the Badger State, including the 355,000 Hispanic Wisconsinites, understand what those in 25 other right-to-work states already know – workplace freedom laws benefit employees, businesses, and even unions themselves. Studies show that right-to-work states have higher levels of economic growth, attract more new businesses, and increase employment. Nationally, the top states for new manufacturing jobs are right-to-work states, as are all of the 5 states which have the highest percentage of residents working in manufacturing. Moreover, by holding unions accountable, right-to-work laws may actually work to cut down on the numerous and well-documented abuses seen in unions, and instead leads to unions paying more attention to the needs of their workers.

Based on legal precedent in higher courts, the recent Wisconsin ruling against right-to-work is unlikely to be upheld. However, the fact that it is being contested is worrisome. Wisconsin Hispanics deserve the right to join a union if they so choose, but they by no means should be forced into doing so. No one should have to choose between paying union dues and making a living, but if this ruling is upheld, that is exactly what will happen in Wisconsin.