Why I Entered the Lion’s Den Known as The View 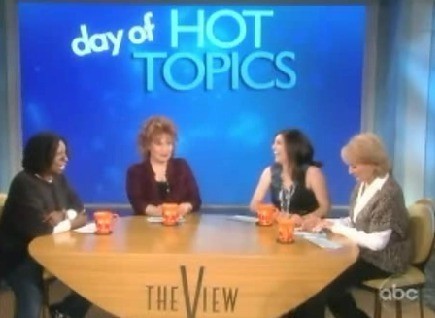 Last week I co-hosted ABC’s The View with the iconic Barbara Walters. As you would expect, I took to Twitter and Facebook to remind friends, family, and fellow conservatives to tune in. Most of the comments and messages I received in response were of the “Go girl!” variety. But many others bemoaned the dilemma of having to “endure” The View in order to support me, or offered up prayers for me as I entered “the lion’s den.”

So, why did I enter the “lion’s den”? Perhaps a better question is: Why do so few conservatives see the urgency of doing so in the era of Kim Kardashian, presidentialEntertainment Tonight interviews and the Daily Show?

It’s probably my reality TV background (both my husband and I are veterans of MTV’s Real World) that has spared me the smug superiority of so many conservatives who think The View, The Today Show or the banal, guilty pleasures of Bravo are beneath them. These shows are fun to watch and fun to be on!

On the other hand, those on the Left, so often accused by conservatives of being “elitists,” have no qualms revealing their populist knowledge of Real Housewives trivia to host Andy Cohen on Bravo’s “See what happens live.” A-list celebrities and political power players such as Sarah Jessica Parker and Eva Longoria, as well as news and opinion makers like Willie Geist and Rachel Maddow, gladly accept invitations to this low-budget, late-night cable show. Meanwhile, Andy Cohen himself interacts with the Left’s political elite on MSNBC’sMorning Joe and on the progressive political and celebrity social circuit. It’s a mutual admiration society that has more influence over popular culture and opinion than many conservatives seem to understand. Such as when the impossibly likeable Cohen takes Jersey’s toughest housewives to task over gay slurs. During his show, he offers the offending housewife (and their spouses) absolution (or at least entrance back into the ‘cool club’ they so desperately want to be part of), but only after the accused diva sufficiently convinces him that she is genuinely repentant and not homophobic. Not since Pedro Zamorra has America’s reality TV audience been better schooled on the LGBT “rules of tolerance”.

I once suggested to a high level GOP operative that the best and youngest freshmen congressmen and women should challenge their democrat colleagues to an MTV town hall on jobs and unemployment. After all, millions of college graduates are moving into their parents’ basements and struggling to pay off student loans on a Starbucks salary. Inevitably, an MTV town hall would invite questions like what’s your favorite band or TV show, alongside frank discussions about social issues and a spattering of embarrassing personal queries (remember briefs or boxers?). They’re the kind of questions politicians hate, but they’re also the kind of questions that (like it or not) make politicians relatable to this demo and help inform their electoral decisions. The upside is that an MTV venue would also provide the GOP a chance to challenge their opponents face-to-face on the liberal policies that are diminishing the dreams of young people and give conservatives an opportunity to lay out their positions on their own terms, while proving that they’re not all bumbling Todd Akins.

After I made the suggestion, the well-heeled strategist looked at me like I had six heads! Unlike politicians and candidates, the problem with these guys isn’t that they’re afraid to delve into pop culture. More often than not, these operative positions are filled with self-possessed nerds who in their 20s, were carrying briefcases and plotting their political ascension, while everyone else was nursing their hangover on the couch watching Real World marathons. In short, these 40 year-old “experts” have more in common with the balding, wealthy donors they golf with, than the everyday Americans conservatives are trying to appeal to in elections.

Meanwhile, conservatives share some of the blame too We stick to a strict diet of FOX News and collective online outrage over Obama’s latest slow jam, dances with Ellen, and March Madness bracket appearances on ESPN — not to mention Michelle Obama’s calculated ubiquity on Nickelodeon and star-studded ceremonies ranging from the Oscars to the Teen Choice Awards. While we protest, liberals are committed and unashamed to occupy and dominate the pop culture space where most overworked, busy, debt-ridden, unemployed, broke, foreclosed on, and persuadable Americans live. And they’re killing it there.

Too often, cautious politicians and their risk-averse advisors and communications directors turn down offers to appear on shows they think are liberal, biased, or insufficiently serious in favor of friendlier or more “respectable” venues. While conservatives wear their detachment from popular culture as a badge of honor, liberals have figured out how to win the hearts and minds of America (or at least elections) without having to worry about pesky facts like the unemployment rate, poverty levels, and national debt — all significantly up since Obama took office, and especially bad for the minority populations they claim to champion.

To ensure more people hear about this reality, we as conservatives have to take some risks, go where we haven’t been before, get uncomfortable from time to time, and meet Americans where they are.

It’s high time our conservative leaders stop listening to the consultants, put their big boy pants on, and play with the lions.

Rachel Campos-Duffy is an author, pundit, and mother of six. She works with the LIBRE Initiative, an organization that promotes economic liberty, empowerment and opportunity for Hispanics.