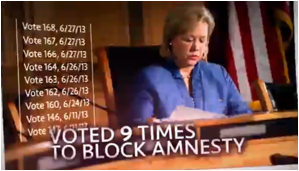 (Washington, D.C.) – According to press reports, members of the Congressional Hispanic Caucus have reached an agreement with the Administration to further delay executive action on immigration. When the White House announced that the president would defer action until after the midterm election, members of the Caucus pushed for a commitment to act before Thanksgiving. But out of concern that this move could hurt Louisiana Senator Mary Landrieu in a possible December runoff, Chief of Staff McDonough reportedly sought agreement to take action later in the year. Reports indicate the Caucus has agreed to the move – despite the fact that Landrieu has attempted to portray herself as an opponent of the very relief many are calling for under executive action.

“President Obama recently showed clearly that when he has a choice between his party’s political outcomes or the policies important to the Latino community, party priorities come first. We now see that if acting on immigration threatens even one Senator, he will brusquely break his promises to his Latino supporters in order to protect partisan allies. What was not clear – before now – was that the Congressional Hispanic Caucus would back his partisan electoral schemes to the hilt, even if it meant shoving the Latino community aside as if they were dispensable pawns on a board game whose usefulness has diminished. They are complicit in this ploy – while Obama gives the community a slap in the face, the Caucus sides with him and gives us a blow to the gut.

We need broad immigration reform – an ideal that Senator Landrieu previously supported, but now is trying to run away from. The country also needs leaders in Washington who have the courage of their convictions – but that is in short supply as well. The Latino community and the people of Louisiana should insist on honesty from the president, his friends in the Congressional Hispanic Caucus, and Senator Landrieu – it would be a refreshing change.”