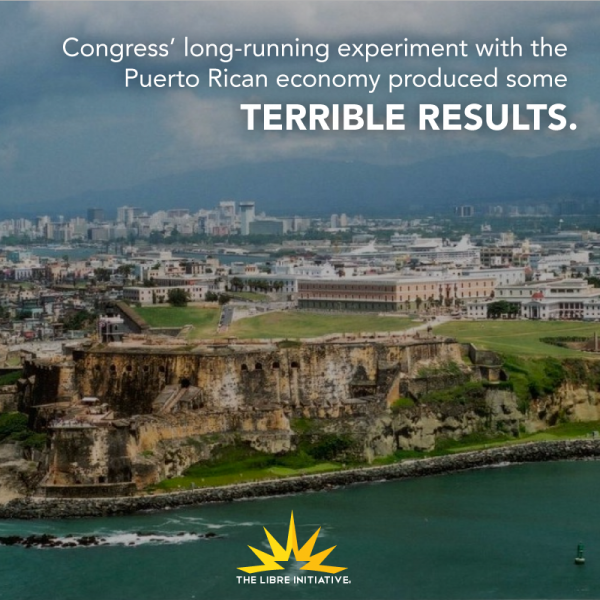 There has been much debate about the causes of the debt crisis that is quickly unfolding in Puerto Rico. The crisis intensified last week, when the Government Development Bank failed to repay more than $400 million to its creditors. Worryingly, many expect the U.S. territory to face additional defaults in the coming months, with a payment of $2 billion due in July.  For an island that typically gets little attention from Washington or the media, virtually everybody wants to lecture us about the reasons Puerto Rico is broke.  Some blame Wall Street. Some blame Puerto Rico’s politicians, accusing them of gross financial mismanagement. While the latter reason undeniably exacerbates a perilous situation, very few in Washington seem to acknowledge that the original sin of the current crisis is something else entirely. It has to do with the most damaging, irresponsible, and poverty-inducing practice known in modern history: politicians who think they can micromanage an economy.

Congress’ relationship with Puerto Rico can be defined as one of the longest economic experiments ever attempted on American citizens; the same type of experiment a PhD might ask economics students to participate in, in order to prove their theories right. The difference is, Puerto Ricans can’t refuse to participate. Congress’ experiment has been one aimed at boosting economic development on the island. So, starting with the Revenue Act of 1921, the U.S. Congress has been micromanaging the Puerto Rican economy via the U.S. tax code. As explained by a recent analysis by the Tax Foundation:

“…throughout the modern economic history of Puerto Rico, one of the central drivers of its economic growth has been the United States tax code. For over eighty years, the federal government granted various tax incentives to U.S. corporations operating in Puerto Rico, in order to spur the industrialization of the island. Most recently, beginning in 1976, section 936 of the tax code granted U.S. corporations a tax exemption from income originating from U.S. territories.”

These types of economic incentives, specifically crafted to attract large corporations’ subsidiaries on the island, were the main driver of the economic growth in Puerto Rico for much of the 20th century. But as the Tax Foundation notes, Puerto Rico was only artificially attractive. Other than Congress’ artificially-created advantages there were very few reasons for companies to move to Puerto Rico. This created a bubble, a very long-lasting bubble that would pop the moment these tax incentives were to be repealed – and that is exactly what happened.

In 1996, President Clinton signed legislation that phased out section 936 over a ten-year period, leaving it to be fully repealed at the beginning of 2006. Without section 936, Puerto Rican subsidiaries of U.S. businesses were subject to the same worldwide corporate income tax as foreign subsidiaries, according to the Tax Foundation”. Unsurprisingly, and with clockwork precision, a deep economic recession started in 2006 – when the exemption phased out on the island — and has not ended to this day.

This growth crisis – coupled with out of control spending — is the true source of the current debt crisis. If the economy of Puerto Rico were growing faster, the government would be in a position today to make payment on its debt. Moreover, when we look at the debt that Puerto Rico currently owes – a staggering $72 billion – and we ask ourselves why investors would lend so much money to this little island,  and once again the answer is Congress. Politicians in Washington have exempted Puerto Rican bonds from all federal, state and local taxes, making investing in the island artificially profitable. There are market distortions around every corner.

So, before the debt, before Wall Street, and before the sins of the current Puerto Rican government, there was the original sin. That sin was the idea that Congress could create sustainable economic growth by the stroke of a pen through the tax code. And if we aren’t careful this behavior could go on for another eighty years, causing more market distortions and more economic suffering for the residents of the island. What is currently happening in Puerto Rico should serve a lesson for all states, all U.S. territories, and for Congress. Sustainable economic growth in Puerto Rico will only happen if the market is allowed to function unhindered by the political whims of elected officials. Any resolution of the current crisis, any action that Congress will take to stop the defaults, will be vain if in the aftermath we continue to allow the government to micromanage the economy of Puerto Rico.