We are after all, a nation of immigrants 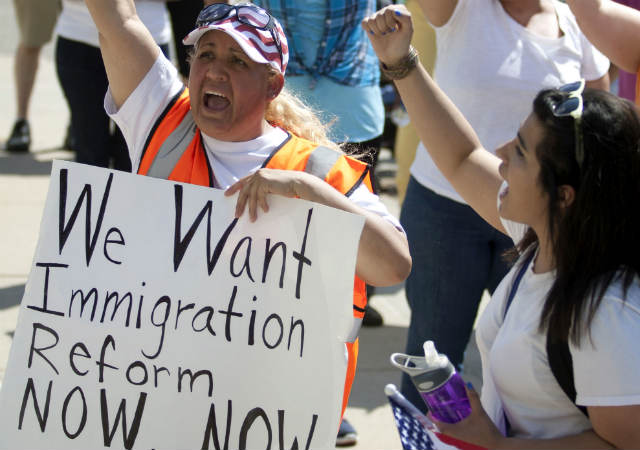 I’m hopeful the recently announced Hoeven-Corker border security amendment may be the game changer we need to ensure that a supermajority of Senators will support legislation to transform America’s immigration law. That would be a good thing.

We are after all, a nation of immigrants. It has always been our strength. In a nation where a vast majority is only two or three generations removed from an immigrant descendant, ours has been a history of welcoming those yearning to be free.

Of course, I’m no Pollyanna. I’m fully aware that sentiments regarding newcomers have always been a point of conflict throughout the history of America.

In the darkest days of the recession John Steinbeck composed a transcendent and sublime masterpiece that would instantly be hailed as an American literary classic, “The Grapes of Wrath.” It was a book in which he detailed the desperate travails of the Joad family, meek and simple folk forced to leave Oklahoma when their small farm was reduced to a barren wasteland as a result of a massive and persistent drought.

In a particularly disturbing passage, Steinbeck described the sentiment many California residents felt when the stream of migrants swarmed into the state seeking jobs, “In the West there was panic when the migrants multiplied on the highways. Men of property were terrified for their property. Men who had never been hungry saw the eyes of the hungry. Men who had never wanted anything very much saw the flare of want in the eyes of the migrants. And the men of the towns and of the soft suburban country gathered to defend themselves; and they reassured themselves that they were good and the invaders bad, as a man must do before he fights.”

And although Steinbeck referred to domestic migration, in many ways — seventy years later -it appears our attitudes towards “outsiders” have barely changed at all.

Millions who are seeking a better life continue to migrate; only today they flee countries ravaged by centralized, statist governments, corrupt regimes, and failed nations. To be sure, the numbers of those who are currently in America illegally are staggering: 11 million men and women living seemingly anonymous lives — unable to properly assimilate. They are mostly decent, industrious people toiling in occupations most of us consider beneath our station, struggling to be as American as the rest of us.

They are motivated by the thought this may be the year Congress decides to resolve their “status.” But there is of course opposition, and at the heart of the resistance there seems to be a paradox. A significant percentage of people — citizens of a nation who once welcomed the “tired and the poor” — now argue that immigration reform will destroy the very America built by wave after wave of immigrant groups originating from just about every corner of the globe.

Americans are a compassionate and caring people. It’s just that we have a thing for smart, effective policy. We take our sovereignty seriously, you see. Border security is essential to the survival of our nation, and that is indisputable.

America has absorbed generations of immigrant groups, and we are stronger because of it. We have understood that those seeking opportunity are not bad, because in the end, they came with the same motivation as those before them — to be a good American.