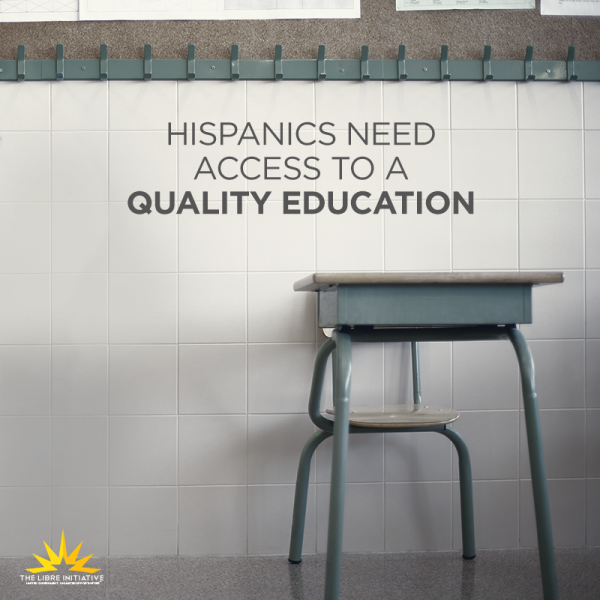 If you want to hurt the poor, take away their access to a quality education. If this sounds cruel and morally unacceptable, that’s because it is. However, that is exactly what some politicians in Washington, D.C. are trying to do.

In its latest budget, the Obama administration defunds the D.C. Opportunity Scholarship Program (OSP), a school choice program that allows thousands of disadvantaged and low-income children to escape failing schools and receive quality education. The program is set to expire on Oct. 1, 2016. Last month, the Senate Homeland Security and Governmental Affairs Committee held a hearing regarding the future of the program. The hearing trailed last month’s passage in the House of an extension of the program which received the support of 238 Republicans and two Democrats.  Hispanics and other minority students will be disproportionately impacted if the program is not authorized and the reason is simple: with the second highest poverty rate among all major racial or ethnic groups, Hispanics are more likely to live in areas with low-performing or failing schools.

Despite the growing evidence that this program is effective at breaking the link between poverty and poor education, the current administration has taken action protect the status quo rather than siding with the children, at least judging by where it is planning to send our taxpayer dollars. Since he has been in office President Obama has continued to underfund the D.C. Opportunity Scholarship Program, while at the same time calling to increase the U.S. Department of Education’s budget. But other than trying to hurt the families that need this program the most, there seems to be no other reason why politicians would want to phase out the OSP. About 91 percent of OSP participants’ graduation rate is more than 30 percent higher than their peers in public school. Participants also increased their reading scores on standardized tests, and surveys showed parents are satisfied with the program. The average annual household income of a scholarship recipient under the program is $20,575, and 97 percent are black or Latino.

While the administration has not offered a clear reason as to why it is turning its back on the program and the thousands of low-income children benefiting from it, we know that the program faces opposition from other influential groups. Washington city council delegate Eleanor Holmes Norton would like to phase out the OSP gradually. The NEA, the largest public education union in the U.S., recently sent a letter to Congress opposing the program.

To deprive low-income children of the chance to participate in a program that has already given them and their families the hope of a better future is heartless. Unfortunately, the education establishment and some Washington politicians have made it a priority to dismantle the program. The House-passed bill, which extends the D.C. OSP through 2021, will soon be considered in the Senate, where the measure is expected to have bipartisan support. If the bill is passed, President Obama will face the decision of whether to sign the bill or not. If the President vetoes the bill, that would be surely be the best way to hurt the poor.