Uncle Sam, May I Work? 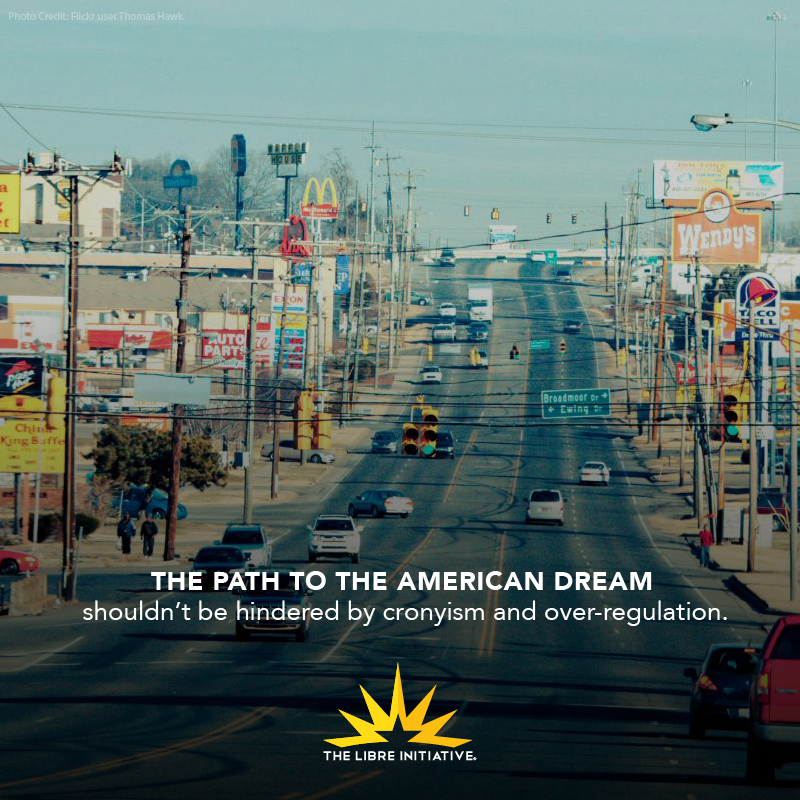 In today’s world, to land a job often requires filling out an application, submitting a resume, and completing an interview. If you’re trying to become your own boss, it is becoming increasingly more difficult as most industries require occupational licenses. In many states, attaining an occupational license doesn’t come easy. Some requirements can exceed over 1,000 hours of mandatory training and hefty fees which create barriers to opportunity. For U.S. Hispanics, many of whom are already struggling to climb the economic ladder, occupational licensing has grown to be a massive obstacle standing in the way of prosperity.

As time has passed, occupational licenses have gone from being a relatively rare tool used to ensure health and safety to being an almost ubiquitous form of protectionism used to limit competition. According to the Brookings Institution, “since the early 1950’s, less than 5 percent of U.S. workers were required to have a license from a state government in order to perform their jobs legally. By 2008, the share of workers required to have a license in order to work was estimated to be almost 29 percent.” Licensing requirements can be found in almost every state, but should so many occupations really require a license?

Some industries face tougher regulations than one would expect. Until very recently, hair braiders in Texas were required to undergo 1,500 hours of training in order to get cosmetology licenses.  If that sounds extraordinary, that’s because it is. 1,500 hours is the same amount of training time needed to get a license to fly a commercial airliner.  Regulators in the Lone Star State used to impose draconian licensing requirements on eyebrow threaders, who only recently managed to overturn the requirements in the Texas Supreme Court. In Arizona, Governor Doug Ducey has rightly protested against occupational licensing, arguing that burdensome regulations are designed to kill competition and “keep out the little guy.”

In North Carolina, lawmakers are considering efforts  to alleviate licensing requirements from barbers, librarians, locksmiths and other occupations. The role of our government is to protect its citizens and our individual liberty, not to create unnecessary barriers. As states continue to look at their occupational licensing requirements, they must consider the people trying to enter markets, not the established interests trying to keep them out.

Hispanics are disproportionately affected by these overreaching occupational licensing laws. The U.S. Hispanic population has reached 55 million and is continuingly growing. Why make it tougher for us? As U.S. Hispanics head into the workforce, younger generations will confront barriers like occupational licensing requirements, making it difficult to attain a job. According to the Hamilton Project, Hispanics are the least likely of all demographics to hold occupational licenses, at just 15 percent. As our government continues to create these barriers to economic prosperity, the wellbeing and economic mobility of the next generation of Hispanic workers and entrepreneurs hangs in the balance.

Access to the job market is vital for Hispanics and young workers. By alleviating some occupational license laws, we can expand opportunities for all Americans to enter into the workforce without facing unnecessary barriers that do not improve our health or safety. However, special interest groups and industry giants have proposed burdensome restrictions and regulations on small businesses and entrepreneurs that create these barriers to opportunity. Nearly 30 percent of workers in the U.S. need a license just to do their jobs. The path to the American Dream shouldn’t be hindered by cronyism and over-regulation. Progress has been made by several states in deregulating growing trades, and others will follow suit. Should people really have to continue to ask Uncle Sam for a job?