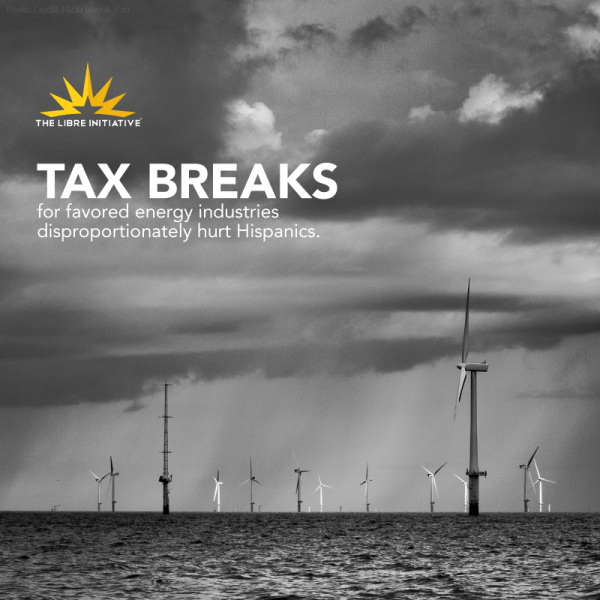 Congress is considering adding a controversial set of tax breaks for favored energy industries in a reauthorization bill for the Federal Aviation Administration (FAA), after they were left out of a tax extenders package passed last year. The tax breaks, which Congress wisely allowed to expire last year, would benefit the wind, geothermal, fuel cell, and combined heat and power (CHP) industry to the tune of $1.4 billion. They are nothing more than corporate welfare, and seriously distort the tax code to favor special interests in the renewable energy industry.

Hispanic and low income households spend a disproportionate share of their resources on energy, and manipulating household energy costs is not an acceptable tool for advancing the interests of green energy producers. Tax loopholes only lead to cronyism and corporate welfare for special interests, and legislators would be wise to reject these tax breaks as the vote on the FAA bill approaches in the days ahead.

Earlier this week, The LIBRE Initiative, along with more than 30 other organizations, wrote a letter to Senate Finance Chairman Orrin Hatch (R-UT) and Ranking Member Ron Wyden (D-OR), advising against including the tax provisions in the FAA bill:

“Congress considered the matter of expiring tax provisions less than 4 months ago. The $680 billion package signed into law in December made some of these items permanent and allowed more than two dozen others to expire at the end of this past year, laying the groundwork for comprehensive tax reform. The $1.4 billion in expiring tax provisions currently under consideration — pertaining to wind power, geothermal heat pumps, fuel cell facilities and combined heat and power (CHP) properties — are a distortion of the tax laws for special interests in the renewable energy industry and were wisely left out of this package.”

These tax breaks distort the tax code to favor certain energy producers over others, independent of consumer choice in the matter. By attempting to pick winners and losers in the energy industry, Congress not only hurts some businesses in order to let others get ahead, but also slows the advance of sustainable, profitable, and viable-renewable energy.

Hispanics in the United States spend a disproportionate share of their household income on energy, and have been forced to spend a higher and higher share as time goes on. Putting their household energy costs at risk in order to prop up less profitable producers is an unacceptable strategy for advancing environmental policy goals, and policymakers would be wise to pursue other options.

If Congress is truly committed to achieving badly needed reforms to the tax code, it can start by ending corporate welfare and giving taxpayers relief. Replacing special interest subsidies with lower, simpler rates would incentivize growth and put more money in taxpayers’ pockets. The government should not use tax policy to pick winners and losers in the economy.