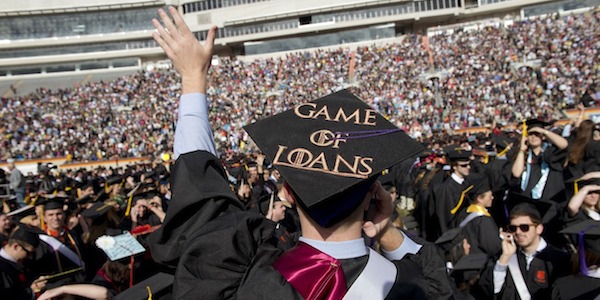 (This article was originally published on Elite Daily)

Did you ever think that going to college would make you worse off than you were when you first started applying?

The answer to that question, at least for me, was no. However, new research from Gallup indicates that high levels of student-loan debt are challenging more than just our economic well-being.

The survey looked at 11,000 college graduates over the past 25 years and found some startling links between the physical and mental health of individuals and the amount of money they borrowed. Indebted graduates rate the status of their health a full 10 points lower than their peers who are unburdened by debt.

The results of this poll were not a surprise to me, nor are they a surprise to the 73 percent of Americans who say they owe more in student-loan debt than they can manage.

Theoretically speaking, I’ve known for a while that high levels of debt make it more costly for individuals to engage in the normal activities that come with graduating from college, such as buying a home, owning a car or starting a family.

However, it wasn’t until recently that I saw those effects start to occur in my own life and I’m now able to identify with the respondents of the Gallup survey.

A recent NBC News poll said that 71 percent of people think that the country is headed in the wrong direction. That same pessimism is also permeating our attitudes towards elected officials; the president’s approval rating is at its lowest ever at 40 percent and Congress’ approval rating is sitting at an abysmal 14 percent.

What’s more is that none of these figures were as shocking as they should be and when they were brought up in a recent interview I had a glib, but telling response – do Americans have anything to be happy about?

Student-loan debt and the lack of leadership being displayed by the Administration and Congress alike is one more nail in the coffin of a generation that has, by all measures, suffered the most under the economic recession.

While others have slowly returned to work, the official unemployment rate for people under 25 years of age remains in the double digits, and the long-term effects are worrisome, as evidenced by the Gallup poll.

It’s no wonder that my generation is unhappy, not only will we lose an estimated $20 billion in earnings over the next decade, but the effects of the poor economic policies of the Obama administration will result in slower economic growth and greater taxpayer burden in the form of lost revenues, increased crime, additional welfare payments and government-provided healthcare.

Six out of 10 people saying that the “American Dream,” which has long been an indicator of success and happiness, is no longer attainable further proves that Americans are ready for some real leadership. Which for my generation will come by providing real solutions to the issue of student-loan debt instead of turning it into a campaign season talking point.

The good news is that there is hope, and it comes in the form of Republican Congressman Tom Petri’s proposal, which would scrap the current student-loan repayment system entirely and turn it into something akin to a tax withholding.

It’s a brilliant idea that Petri has been advocating since 1983 and just recently gotten high-profile support from the likes of Florida Senator Marco Rubio and even some colleagues across the aisle.

This bill could be one of those fabled, hallmark moments of bipartisan accord where government actually puts the needs of people first instead of playing politics with their futures and livelihoods.

In the infamous words of Albus Dumbledore “Happiness can be found in the darkest of times, if one only remembers to turn on the light.” One can only hope that elected officials use Tom Petri’s lightbulb and give us a switch to flick in the coming months.