Scoop from CPAC: The Women’s Panel 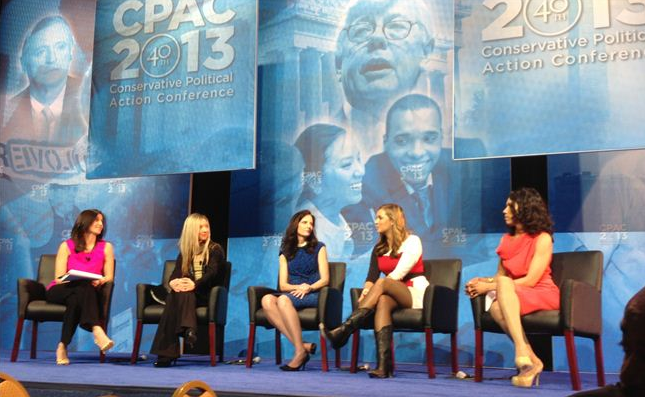 Two days after I returned home from CPAC 2013, I met with a small group of conservative friends in Dallas and one asked what was my favorite part of CPAC. I did not and cannot choose my favorite speaker or panel, because so many were fabulous. But the all-women panel that made abundantly clear that liberal policies constitute an ongoing and long-term real war on women’s progress, was among my favorites.

The panel, “The Right View…and the REAL issues” featured:

It was held in the largest meeting room at the Gaylord National venue, and had SRO in a room that seats 5,520 people. (But I thought conservatives never listen to women…)

The mere presence of this panel of sharp, young, insightful and conservative women at this conference speaks volumes about the power of the conservative message and its potential to reach more women voters. Those who know how much better conservative answers are for women, and how bright these women are, need to spread the message and support these ladies!

All panelists were classy and very impressive — I’ll offer just a few thoughts:

Crystal Wright of conservativeblackchick.com was the most outspoken, and left no doubt that the efforts of Democrats to sell liberal victimology-based political thinking to blacks and women are ineffective and unpersuasive, at least to those paying attention. Her blog covers Rand Paul’s famous filibuster to limit drones, the shallowness of the Obama’s WH expenses, and the idiocy of Michelle’s Oscars appearance, along with sequester humor, urging politicians to make Obama own it, and much more.

Katie Kieffer is just as spunky in person as her persona on her blog, http://katiekieffer.com. She covers a multitude of the serious issues facing our nation, in her blog postings and her speeches, and can speak as well on the economy, and education, as on health care and national security. Substantive, smart and effective.

Kate Obenshain is the author of Divider-in-Chief: The Fraud of Hope and Change. She radiates brilliance, insightfulness and high-energy, and has a world of experience speaking publicly and on-air about the failure of liberal policies to work as intended, or to help women. She was also particularly outspoken and impactful on the panel.

Katie Pavlich is a news editor at Townhall.com and also the author of Fast and Furious: Barack Obama’s Bloodiest Scandal and the Shameless Cover-Up. Katie brought a wealth of experience and knowledge to the panel about the depth of lawlessness in the current administration.

Moderator Rachel Campos-Duffy, national spokesperson, the LIBRE Initiative, did not need to spend much time prompting panelists to speak, as she shared the stage with confident and sharp women who are accustomed to speaking their minds. LIBRE is dedicated to spreading the message of economic liberty to Latinas, youth and faith-based communities. Rachel is a frequent contributor on The View.

These are role-model type women, the kind you hope your daughter grows up to be. Independent, self-sufficient, successful, thoughtful—and conservative!