School Choice in Washington D.C. – Working So Well, the White House Wants to Kill It 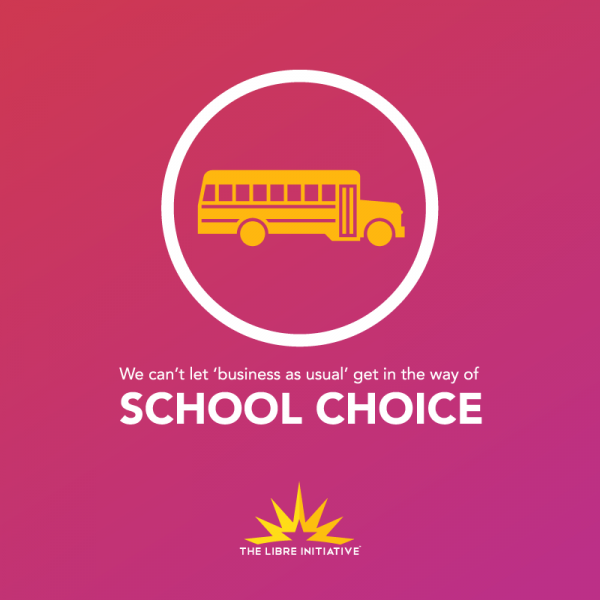 One of the most frustrating truisms of “business as usual” in Washington D.C. is that when something works ‘too well,’ the government loves to step in and stop it. Sadly, this might be the fate of the D.C. Opportunity Scholarship Program (OSP), a school choice program that allows thousands of disadvantaged, low-income, and minority children to escape failing schools and instead receive a quality education.

The U.S. House of Representatives today approved a reauthorization of the OSP by a vote of 224-181; The LIBRE Initiative joined with Generation Opportunity to also express support for the program. The White House and labor unions, however, have signaled their disagreement with the program and have tried to eliminate it in the past, but fully 97 percent of children participating in the OSP are black or Hispanic. If the President truly wishes to help our community, he should stop trying to kill the overwhelmingly successful program.

Since 2004, the clear benefits of the scholarship are numerous. First, the OSP has improved the quality of education for thousands of low-income children in Washington, D.C. The program – which provides federally funded scholarships to low-income children for tuition and other fees at participating private schools – sees about 91 percent of OSP participants graduate: a rate more than 30 percent higher than the rate of their counterparts in public school. Additionally, participants also increased their reading scores on standardized tests, and surveys showed parents are satisfied with the program. Furthermore, the average annual household income of a scholarship recipient under the program is $20,575.

Because of the numerous benefits of the program, it comes as no surprise that the reauthorization of the OSP, called the Scholarship for Opportunity and Results (SOAR) Act, enjoys bipartisan support. Agreement from both sides of the political spectrum is a rarity at a time when many issues are politically polarized. In fact, in a letter to Speaker of the House Paul Ryan in March, Democratic D.C. Mayor Muriel Browser and eight council members urged the Speaker and House representatives to pass the reauthorization before the end of the current session.

When the White House first expressed its disagreement with the program back in 2011, it cited concerns that the program would help a small number of individuals attend private schools rather than creating access to great public schools. The National Education Association, the largest public education union in the U.S., echoed a similar concern last year when they stated that the OSP would divert resources from public to private schools. But these concerns do not stand up to scrutiny. As explained by D.C. Mayor Bowser in her letter to Speaker Ryan:

“Our support for the SOAR Act is rooted in the importance we place on the much-needed federal funding for DC Public Schools (DCPS) and public charter schools which totaled $30 million in FY 2016. This funding is provided via our DC federal payments and does not take away our state formula funding for education; rather, it adds to it. A reauthorization of the SOAR Act would help safeguard $150 million in federal funds for DCPS and public charter schools over five years. These funds are critical to the gains that the District’s public education system has seen in recent years”.

With a lack of evidence that the program hurts public schools – and a wealth of support for the benefits the scholarships provide to low income and minority students — there is no reason for the White House to veto the bill. The program is breaking down barriers to opportunity for the least advantaged in our society, something that the centrally-planned public school system has been unable to do for decades. If the administration decides to side with the unions and stop the program, it would take away a quality education from these children, and contribute to the vicious cycle that many times begins with poor education.