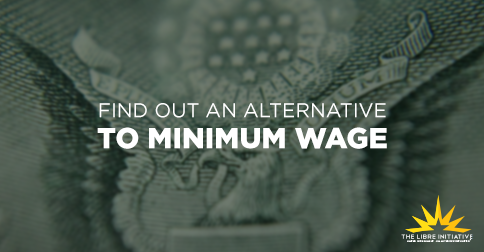 The public debate on how to best help the working poor has recently been polarized by pushing the idea that raising the minimum wage is the only solution to fight poverty. Unsurprisingly, this approach is alluring because supporting the working poor in a very direct and seemingly helpful way appeals to our sense of compassion, equity, and “fairness.” However, raising the minimum wage would not be any of those things to the worker who need the most assistance. As highlighted by the non-partisan Congressional Budget Office, while some workers would receive higher pay, jobs for many low-wage workers would probably be eliminated. In this sense, this policy would benefit some workers at the expense of others. The impact of a minimum wage increase would also be particularly severe for Hispanic immigrants, who tend to be concentrated in low-wage occupations. Fortunately, raising the minimum wage is not the only step we can take to alleviate poverty and help the working poor.

A recent report by the Manhattan Institute, “The Wage Subsidy””A Better Way To Help The Poor”, explains why a wage-subsidy program would be a better tool to help the working poor than a higher minimum wage or even the popular Earned Income Tax Credit (EITC), a refundable tax credit for low-to moderate-income working individuals. According to the report, a wage subsidy would help policymakers reduce poverty more effectively because it would avoid many of the market distortions, inefficiencies, and negative consequences created by these programs. The report explains that unlike raising the minimum wage, which puts an unfair burden on the shoulders of employers and harms low-income consumers through higher prices, a wage-subsidy program would avoid these problems.

One important reason for this is that a wage-subsidy program would be paid collectively by society through its tax base, not only by employers. As the report puts it: “If society wants to increase the incomes of low-wage workers, it should do so collectively, through its tax base, not through off-budget mandates on employers offering jobs.” In this sense, a wage-subsidy program would be expensive for the taxpayer but also more transparent, and society as a whole would have a stake in whether or not to implement such a program. As highlighted in the report, Nobel laureate economist Edmund Phelps estimated the cost of a wage subsidy proposal at $185 billion annually. It is worth noting, however, that the government already spends more than $150 billion annually on a variety of safety-net programs that provide in-kind benefits to the working poor. Under Phelps’s wage subsidy plan, redirecting funds from existing anti-poverty program to pay for the wage-subsidy proposal would have net cost of zero when taking into account the ensuing increased employment.

As we move closer to the 2016 Presidential elections, the already-polarized debate about raising the minimum wage is expected to intensify. But it is important to recognize that the choice between raising the minimum wage and maintaining the status quo is a false one. There are other policies that can increase the well-being of workers without hurting those in low-wage professions. First and foremost among these is stronger economic growth, which increases the wages of workers across broad swaths of the economy without government intervention and mandates. Policies that reduce government spending, regulation, and debt, may help create the rising tide that “lifts all boats.”

Additionally, exploring the merits of a wage-subsidy program, together with reducing the number of obsolete and unnecessary regulations, eliminating unneeded occupational licensing requirements, and lowering taxes should all be part of this conversation. When it comes to reducing poverty, our country deserves to be choosing among a variety of policy options. We should not let politicians and the media corner us into believing that their solutions are the only effective way to help the poor.