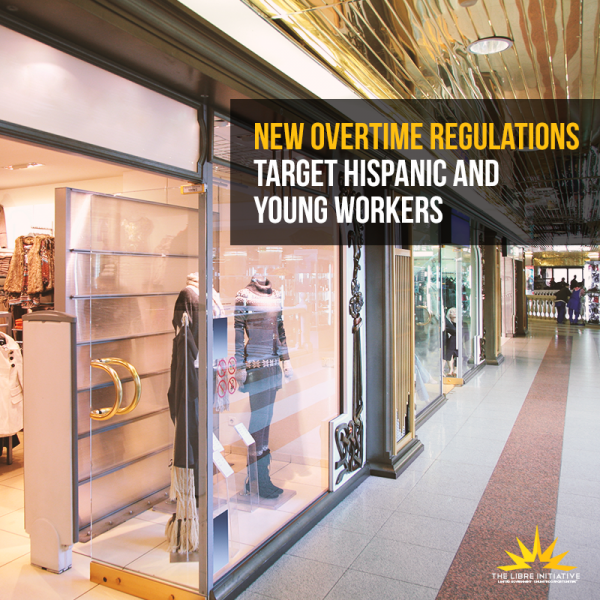 A new proposed rule change to federal overtime regulations will raise the salary threshold for overtime exemption nearly two-fold, which advocates claim will give ordinary workers a raise.  In fact, many workers will possibly see their hours cut, their pay fall, and their schedules become rigid.  For Hispanics and young people, the unintended consequences may not be worth the risk.

At present, businesses must pay an employee time and a half for every hour worked in addition to the 40 hour week if the employee is paid a salary of less than $23,660 a year.  Under the President’s proposal, this $23,660 threshold would be raised to $50,440, mandating that all employees earning less than that amount be paid overtime.

“Proponents of the policy argue that the new rules will either boost incomes for workers by increasing their earnings for the hours they are working now, or will boost employment if employers fill the additional hours with new workers instead of existing ones,” writes economist Aparna Mathur, at the American Enterprise Institute.  “However, the economic evidence so far indicates that neither of these outcomes is likely to occur. Instead, what seems like a win-win proposal for workers is in fact a lose-lose proposition for both workers and employers.”

If you are a worker who makes between $23,660 and $50,440, there are four different possible outcomes of this policy, and not all of them are good.

For some, this regulation may actually function as intended, and merely force businesses to increase compensation by making them eligible for overtime pay.  Another possible outcome is that workers earning salaries close enough to the $50,440 threshold – for instance, workers earning $49,000 – may see a slight raise to bump their earnings just enough to make them ineligible for overtime pay.  Despite this, these workers would still have less take-home pay over the course of a year than the regulation intends.  These workers are the lucky ones.

For others, however, the likely outcomes will differ.  Because the regulation increases the cost of labor without increasing the value the worker contributes, many workers will see their hours cut, as happened under the Affordable Care Act.  Still more workers could see their pay fall, as employers would reduce actual wages in order to compensate for increased costs.  Both of these possibilities are examples of how government attempts to raise wages by fiat, as in this regulation or in the minimum wage, benefit some workers but cause others to lose out.

These risks are especially dire for Hispanics and young Americans, who are disproportionately represented in jobs that will be affected by this regulation.  While Hispanics make up just under 12% of all salaried workers, they make up over 15% of workers who would be affected by the new rule.  Additionally, roughly 1.8 million millennials will be affected by the rule change, and not all of them will simply get a raise.  As we have seen, the policy will likely not have exactly the outcome the President intends it to have because the government cannot simply require an increase in salaries without impacting costs and prices.  At some point, the reduced hours, pay cuts, and changes in pay may no longer render the regulation worth it.

In order to address the problem of stagnating wages and limited opportunities, policymakers should judge policies on their outcomes rather than their intentions.  Instead of attempting to raise wages on paper without changing the value of the work in reality, they should recognize that true wage growth can only happen when the productivity of a worker increases.  In a free society, individuals profit and earn money by creating value for each other in a system of free exchange.  As with proposed increases to the minimum wage, raising the threshold for overtime exemption is unlikely to come without unintended consequences.  For Hispanics and young Americans, those consequences may not be worth the risk.