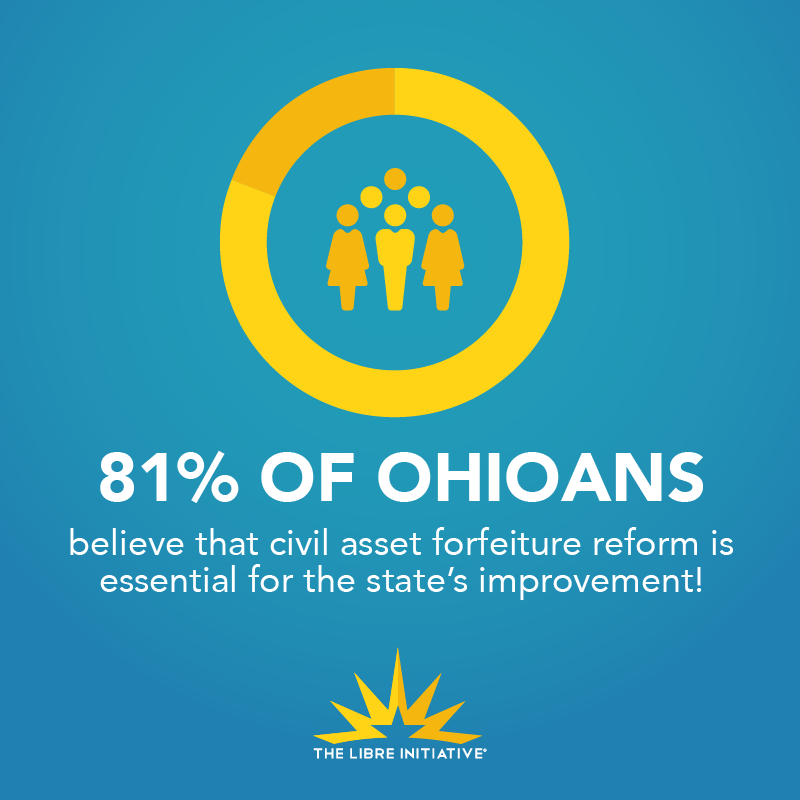 Thanks to pressure from a coalition of conservative, libertarian, and progressive organizations in Ohio, the state senate has voted to pass a bill to limit the practice of civil asset forfeiture, a tool used by police to seize property from citizens without even charging them with a crime.

“H.B. 347 would limit state law enforcement’s coordination with the federal government unless the seizure is greater in value than $100,000. Doing this closes a loophole allowing local law enforcement to use federal standards when forfeiting assets,” writes Krista Chavez of Americans for Tax Reform. “The legislation also requires a criminal conviction for the government to seize the property. The bill would also end civil asset forfeiture for most cases were the property exceeds $25,000 in value.”

Civil asset forfeiture has been shown to disproportionately impact Hispanics, who are statistically more likely to have their property taken by the police, regardless of whether they have committed a crime. Whatever the underlying cause of this disparity, ending this flawed practice is an unmistakable step in the right direction toward ending the two-tiered society that has emerged in this country.

Police seized whopping $8.5 million from Ohioans between 2010 and 2012 on average, and that should come as no surprise. According to the Institute for Justice, the Buckeye state earns a D- on civil asset forfeiture for the low bar it sets for police to seize property. Prior to the passage of this week’s reforms, Ohio did not require a conviction, did not protect innocent third party property owners, and allowed law enforcement to keep almost all of the proceeds from seizures.

The measure was fiercely criticized by special interests across the state, many of whom continue to voice objections. It’s no surprise that groups like police unions and the Ohio Prosecuting Attorneys Association would try to put the brakes on the bill. In many cases, police departments depend on civil asset forfeiture for significant portions of their budget, creating a strong incentive to indiscriminately seize property. In many states, police do not even have to charge someone with a crime before seizing their cash, cars, or even their home. The departments later sell the goods and keep the money to fund other services within the department, and are under no legal obligation to return the property if their initial suspicions prove to be false. Sometimes the police even fail to provide a receipt.

Yet any lawmakers worried about backlash from special interests shouldn’t worry. The next time Election Day rolls around, these critics will face overwhelming opposition from the people of Ohio. According to a poll last year of registered voters in Ohio, reforming civil asset forfeiture is a winning issue. Fully 81 percent believe that civil asset forfeiture reform is essential for the state’s improvement.

The Ohio legislature deserves a pat on the back for this important step toward creating opportunity for everyone in the Buckeye state, and legislators across the nation should take note. In the year to come, there are a number of reforms that other states can pass that would lessen the negative impact of civil asset forfeiture and build on the progress that Ohio has made. Instead of allowing police departments to keep the proceeds of forfeitures, the money should go to the state’s general fund, so that individual departments no longer have an incentive to seize property for no good reason. When police do seize property, they should be required to supply a receipt indicating the items forfeited and their value.  If their suspicions are proven to be false, they should be required to return them. Most importantly, states should abandon civil asset forfeiture entirely, and switch to a system of criminal asset forfeiture – where the owner must be convicted of a crime before the goods can be taken.