Occupational Licensing is a Job Killer 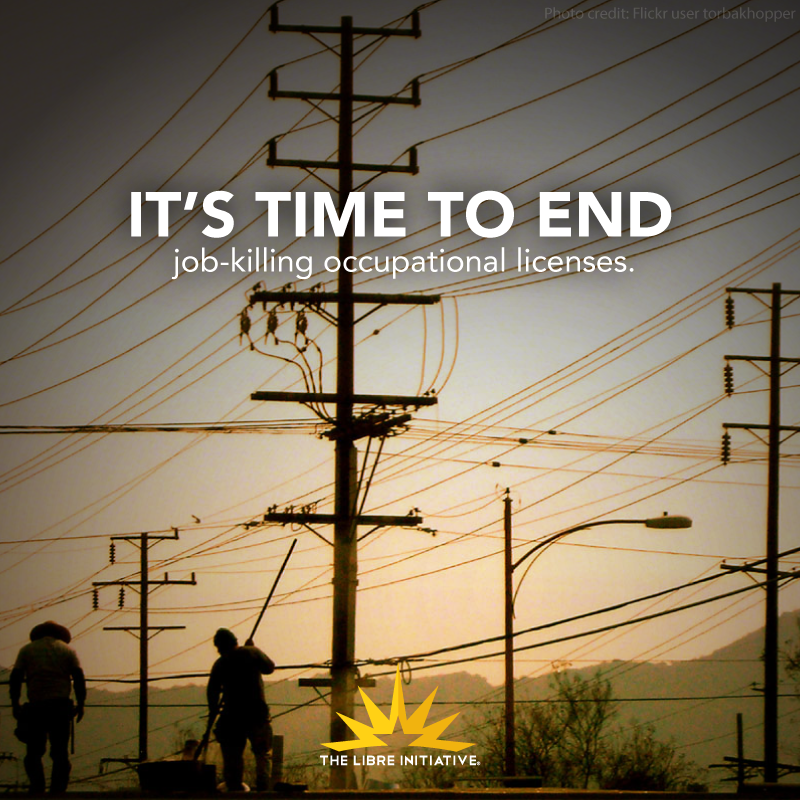 Overzealous occupational licensing is costing us jobs, and it’s far past time to demand an end to this protectionist and harmful requirement. A job is an essential component to making your way in life and achieving the American Dream, but with the exception of this past month, the United States has been experiencing sluggish job growth. When this month’s jobs report came out, it was welcome news that the economy added 287,000 new jobs, up from the prior month’s measly 11,000, but the dramatic fluctuation probably does a lot to explain why many Americans instinctively feel uneasy about the stability of the economy and the direction that our country is heading. One area where we could make an immediate difference, however, is in how we approach government-licensed professions, which are subject to higher barriers to entry than other professions.

Occupational licensing – the need to petition and often pay the government for formal permission to work — puts up hurdles to employment. The practice has become an increasingly prevalent problem in recent years, so much so that a recent White House report took note and outlined ways to improve the current situation.

Occupational licensing requirements are usually pushed by industry representatives who claim that their license – and government oversight – will protect people from unnecessary risk, under the stated goal of safety or consumer protection. While health and safety protections are important, we have gotten to the point that occupational licensing creates barriers to opportunity for would-be entrepreneurs. At this moment, many licenses required under the current system only serve to protect politically-connected industries. Long periods of training and high fees preclude many Americans from entering the market, to the detriment of both American workers and American consumers. Prices rise, and jobs become out of reach.

The problem of occupational licensing has sharply risen in recent years – in the 1950’s, only one in 20 workers needed a license, but today, anywhere from one-quarter to one-third of all U.S workers need government permission to work. That means a huge fraction of the labor force is restricted by often-arbitrary government requirements. The growing severity of this problem has led to bipartisan support for occupational licensing reform, with Republicans and Democrats alike working together to tackle this issue.  Even the White House outlined the progress that we have made in the past year on occupational licensing reform, presenting possible steps that we could take in order to increase the probability of reform in the future, including the possibility of federal funding for reform initiatives and federal action to reduce licensing barriers for those with criminal records.

One of the many groups that the report discusses is the immigrants who have already completed education or training abroad. Currently, the government requires these immigrants – many of them Hispanic – to go through additional training when they arrive in the United States, even if they have already been certified in the same profession in their home country. Of course, there are often different rules and regulations in the United States, and it is not unreasonable to ensure that immigrants know the local rules before starting to work, but often these requirements go far beyond the additional training necessary and present serious barriers to success.

Occupational licensing affects immigrants at all levels of education. In areas that require advanced degrees, like healthcare, the number of licensing requirements continues to increase, and the already-existing requirements are becoming more onerous. Immigrants represent over 20% of all American physicians and direct care workers, and they disproportionally serve low-income areas. Looking at these numbers, you would be surprised to know that it is much more difficult for immigrant medical graduates (IMGs) to complete their residency than it is for U.S. medical graduates (USMGs) – not only do all states require that IMGs complete their residency requirement at a U.S. facility in order to practice in the U.S., but an additional 37 states also have lengthier requirements – up to three times as long as U.S. medical graduates – creating a harmful residency bottleneck for IMGs. These restrictions not only harm immigrants with advanced degrees – they affect immigrants in occupations that do not require higher educational training, as well. The dispersion of immigrants across the country and their assimilation into American society may also be impeded by regulations, including in occupations such as manicurists, beauticians, and taxicab drivers.

Hispanic immigrants are only one group of many that are hurt by occupational licensing. The White House report emphasizes how occupational licensing hurts those with criminal records, and numerous other accounts show strict licensure laws hurt young people, low-income workers, and even American consumers. And after all of this harm, these laws fail even to deliver on their promise of increased quality. Licensing restrictions cost millions of jobs nationwide – if we want to make progress on promoting job creation and fostering economic growth in our country, we should work on lowering the barriers to entry for those who want to work. And that means killing these job-killing occupational licenses.