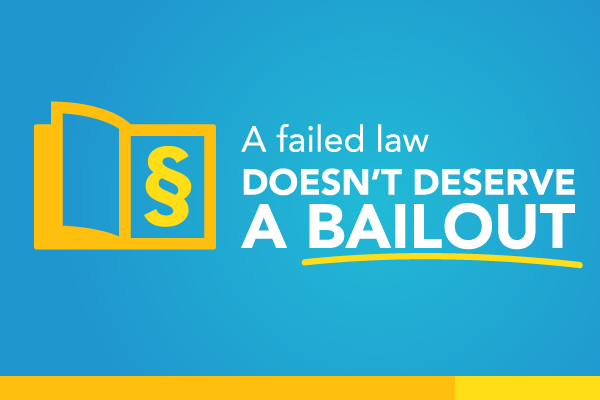 This past election has made it clear that government-run healthcare is in trouble. Opponents of the president’s health care law will propose alternatives in Congress, at a time when 80 percent of Americans want the law replaced or significantly changed. At the state level, Colorado’s Amendment 69, which would have created single payer healthcare system, failed spectacularly, with almost 80 percent of Coloradans voting against it. Taxpayers have seen and felt the failures of the Affordable Care Act (ACA), and have decided that they want no more.

Yet many at the federal level seem to be ignoring this voter sentiment, and are proposing a way to try to prop up President Obama’s failing law. Insurers and proponents of the law are proposing a taxpayer-funded bailout of insurance companies, which would ultimately hold American citizens financially responsible for the failures of Obamacare.

The problems with the President’s healthcare law started at its conception, when proponents promised Americans a boom in high-quality insurance options at low cost. Insurers – along with most thinking Americans – realized the obvious problems with this idea, and sought a way to protect themselves from losses. Even the architects of the law expected that for the first few years, insurers would have issues correctly pricing insurance plans for the vast population of new enrollees. In order to mitigate this problem, the creators of Obamacare created two temporary programs – the risk corridor program and the transitional reinsurance program.

The risk corridor program was designed to insulate insurers from both extreme losses and gains caused by overpricing or underpricing health insurance coverage. If an insurer set their prices too high, they were required to pay a portion of their profit into a fund that would reimburse those insurers who set their prices too low. This was supposed to stabilize premiums and protect against inaccurate premium setting during initial years of reform.

Similarly, the reinsurance program collected a fee from all insurers, in order to pay for the unexpected costs incurred through the coverage of new, high-cost individuals – proponents have called it “insurance for insurers.” Both of these programs were designed to help Obamacare get on its feet, and both are set to expire in 2016, when it presumably has had enough time to do so.

However, 2016 is almost over, and the ACA looks no closer to being a stable and viable system. Insurers are leaving the exchanges, as they have been losing money in a whopping 41 states. Only 7 of the original 23 ACA co-ops remain. Premiums are set to increase by an average of 25 percent in 2017. Gone are the days when the Obama administration insisted that “if you like your plan, you can keep your plan” – now, the administration is frantically attempting to even make sure that each county has even one insurer available. Looking at these numbers, it is no wonder that studies have shown that generations of Hispanics have a deep mistrust of government institutions and insurance companies. These institutions have failed to act in a way that would gain Hispanics’ trust, and yet instead of sticking to their word and fulfilling their responsibilities, the government and insurance companies want to continue to be able to break their promises with impunity.

As Milton Friedman once said, there’s nothing more permanent than a temporary government program. Instead of acknowledging and addressing the problems inherent in this flawed law, Obamacare’s desperate defenders want to put it on life support by actually extending these reinsurance and risk corridor programs. So much for “temporary.” Not only would this solution not work to fix the problem it was intended to solve, but it would also come at an enormous cost to the taxpayer. These deals would cost billions of dollars, all to try and salvage a law that seems doomed to failure.

Americans deserve better than this. Taxpayers can’t be expected to dole out more corporate welfare to bail out big insurance companies just because the ACA is such a disaster. Congress must allow the transitional reinsurance and risk corridors programs to sunset at the end of this year as scheduled, and must proactively work to pass legislation that locks in budget neutrality. In addition to this, lawmakers should pass the Taxpayers Before Insurers Act, which will allow us to recoup all taxpayer dollars unlawfully given to insurers through the transitional reinsurance program. Obama and his special interest pals in the insurance industry cannot leave American taxpayers on the hook for their missteps.