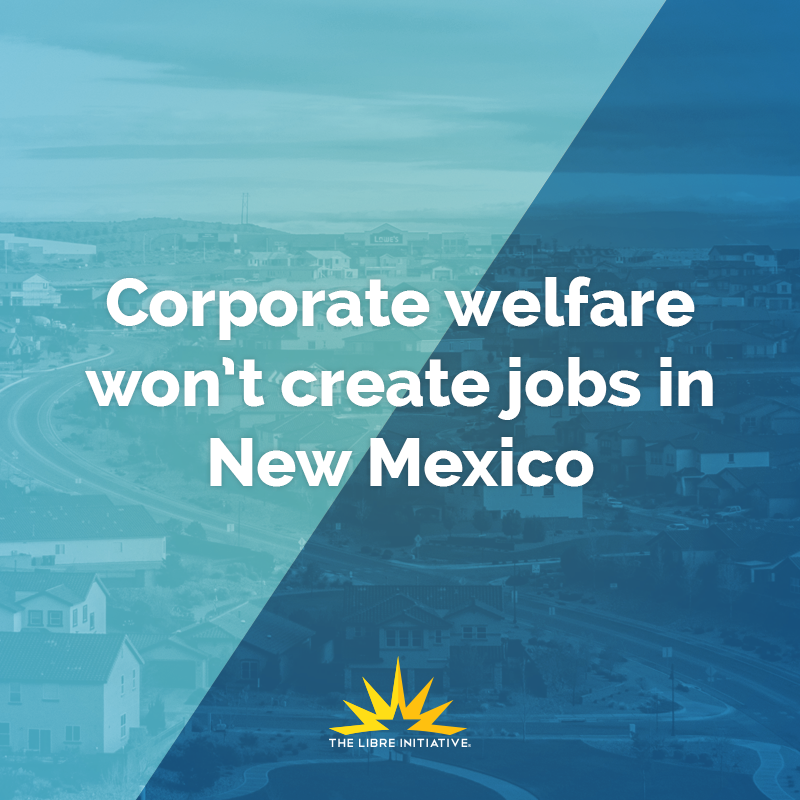 Legislators rolled out a plan this month to boost jobs in the Land of Enchantment by raising taxes, doling out taxpayer dollars to politically connected companies at the expense of small businesses, and making it more expensive to hire workers.

If that sounds like a bad idea, that’s because it is.

The recently announced “New Mexico Jobs Now!” plan includes six policy prescriptions, only one of which will actually improve the economy of the state. Democrats in the state legislature plan to increase spending on infrastructure, raise the minimum wage, use taxpayer dollars to pay for broadband, allow industrial hemp research, and double down on two corporate welfare programs: the Local Economic Development Act (LEDA) and Job Training Incentive Program (JTIP).

“There is a serious jobs crisis afflicting New Mexico today. We face major economic challenges, and these consensus measures will help put people in our state back to work quickly, explained Senate Majority Floor Leader Senator Peter Wirth. “Before we take action on any other legislation, we intend to put bills from these six legislative areas on an accelerated track. Our goal is to attract new jobs to, and expand existing businesses in New Mexico, right away.”

There’s nothing wrong with allowing research on new agricultural products, but unfortunately none of the other five legislative areas are going to create jobs for New Mexico. For starters, according to a study by The LIBRE Institute, high minimum wage rates are tied to lower levels of employment, especially in cases where average wages are lower relative to the minimum wage rate. This effect is magnified for young people and Hispanics, who are much more likely to lose their jobs as a result of minimum wage hikes. Bafflingly, advocates of this jobs plan seem to think the best way to get more people hired is to make it harder and more expensive to hire people.

On the other hand, LEDA and JTIP are two of the biggest corporate welfare programs in the state, doling out $55 million and $6 million respectively. Both programs allow the government to pick winners and losers in the marketplace, often benefiting politically connected companies at the expense of everyone else. Making matters worse, the state does not receive sufficient reporting from businesses using LEDA to property evaluate the effectiveness of the program. At the same time, the Economic Development Department has asked to reduce measures of performance under JTIP, to stop reporting average wages and retention of workers using the program. Not content to spend money needlessly, Santa Fe seems intent on doing so in the dark as well. The bottom line is that corporate welfare is not the right approach to economic development in New Mexico.

The legislature needs to face the facts: they’re just not willing to make tough decisions. Money already flows freely in Santa Fe: state and local governments in the Land of Enchantment spending accounted for about a quarter of the state’s GDP last year, out-spending all but three other states in the nation. What’s more, New Mexico government workers earn an incredible 24 percent more than the private sector workers who are taxed to pay their salaries. More spending is not the solution. On the contrary, it endangers the financial future of New Mexico.

It’s vital that that the legislature be realistic and open to compromise if the state’s economic situation is ever going to improve. Making it harder to hire workers, picking winners and losers in the marketplace, and spending even more of taxpayers’ hard earned money isn’t the answer.