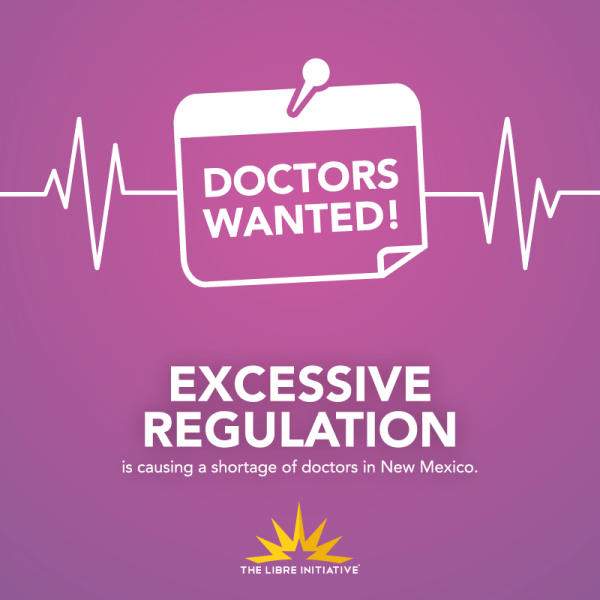 For the past several years, New Mexico has grappled with a doctor shortage. News reports as far back as 2012 indicated that the United States would experience a shortage of more than 60,000 doctors by 2015. According to more recent projections released by the Association of American Medical Colleges, that shortage my grow to as much as 90,000 in the coming years as well. With a shortage of primary care doctors, those in need will face a longer wait to get an appointment, packed waiting rooms, shorter visit times, and even greater impacts among specialty doctors. In order to address the shortage of doctors in New Mexico and the nation, policymakers must critically examine occupational licensing, certificate of need laws, and high tax rates that all work to suppress the supply of services in the healthcare industry.

In an annual report, the New Mexico Health Care Workforce Committee compared the state’s number of health professionals to the national averages and determined that there are significant shortages in most areas of the state. As New Mexico is a mostly rural state, with few major cities, the physician shortage is of particular concern to the 34 percent of the state’s population living in rural areas. Compounding the problem, doctors in the Land of Enchantment are the second oldest in the country. In 2014, the average age of New Mexico physicians was 52.9. The state also has the highest percentage of physicians that are 60 or older at 33.3 percent, compared to the national average of 27.6 percent. As a result, the doctor shortage in the state may very soon worsen unless policymakers take concrete measures to allow the healthcare market to meet demand.

Hispanics in New Mexico currently account for 47 percent of the population, and as the state’s Hispanic population continues to grow, the number of Latino physicians has fallen to 105 Latino physicians for every 100,000 Latinos in the state. Latinos in America face unique challenges in their access to health care, including language barriers and increased wait times, and the numerous failings like those we see in New Mexico have only exacerbated these problems.

There are a number of factors to blame for the shortage in the U.S. overall. Ordinarily, in a free market prices rise and fall according to demand, which acts as a signal that causes suppliers to produce either more or less.  However, in the case of the healthcare industry, the government has placed restrictions on the supply of doctors through excessive licensing rules that limit the number of people that can become doctors, nurses, and other healthcare professionals. Furthermore, many states employ burdensome, anti-competitive ‘certificate of need’ laws that require new healthcare providers, like urgent care clinics, to obtain permission from local boards in order to do business.  When these boards are comprised of existing providers in the area, who are their direct competitors, certificate of need laws create a perverse incentive to prevent new providers from entering the market. Making matters worse, the United States has the most progressive income tax system in the developed world, which has the effect of penalizing highly-compensated and productive workers in our society, including hundreds of thousands of healthcare professionals.  In the coming years, the problem is set to worsen.  According to estimates by the Mercatus Center, Medicare is contributing to a potential shortage of 90,000 doctors nationwide by 2025.

Policymakers must address all of these issues and more if they wish to improve access to healthcare for Hispanics in New Mexico and around the country. For the growing Hispanic community, access to care is very important. Families face limited options, longer wait times, and shorter visits. For New Mexico, legislators must take the necessary steps to ensure that the market can adequately respond to demand for services in the healthcare industry.