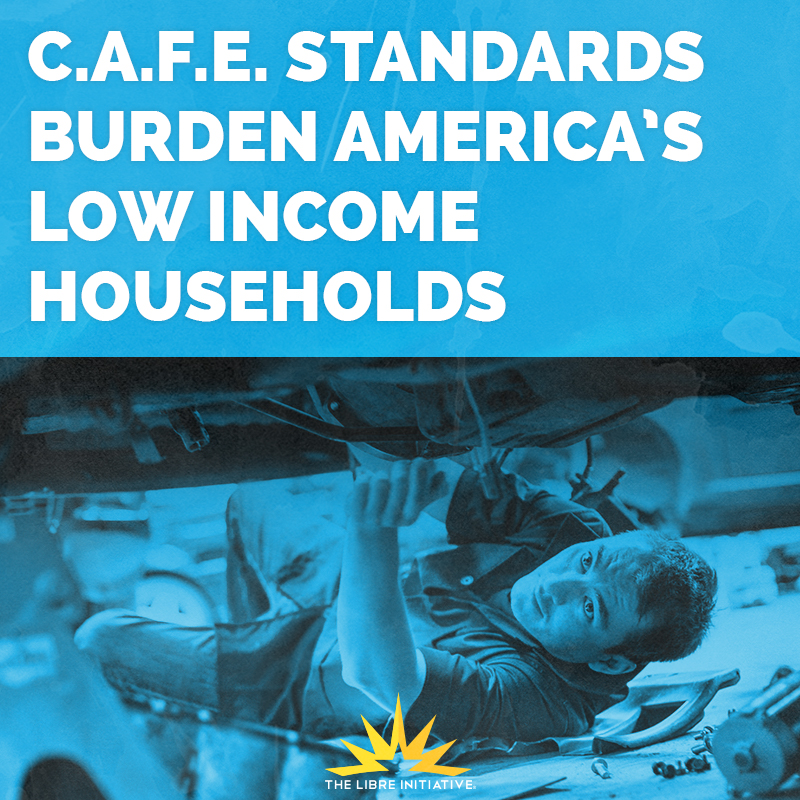 Sometimes bad policies have negligible negative impacts on the everyday life of Americans, but sometimes the harmful effects are so large and so fundamental that they are hard to overstate.

The Corporate Average Fuel Efficiency Standard (CAFE) falls into that unhappy latter category for being an especially “costly, inefficient, and ineffective regulation.”

In a nutshell, this rule requires car makers to improve the average fuel economy (miles per gallon) of cars and light trucks produced for sale in the United States – an obligation that significantly increases the cost of production for car manufactures, and which in turn is passed on to consumers.

Some estimates put the regulatory burden at $3,800 per vehicle, affecting many consumers, especially Hispanics, who simply don’t have the financial resources to afford the artificial cost hike.

This policy approach has many shortcomings, but the most fundamental lies in its regressive nature; that is, that it takes a larger percentage of income from poor Americans in comparison with rich folks.

A peer reviewed study “modeled the CAFE standards increase, distinguishing between different automakers and including the used car market” in the model. The study found that “consumers’ losses add up over time as the costs of the new regulations work their way through the used car market, concluding that after 10 years’ adjustment, the burden of the regulations will fall most heavily on households with incomes below $25,000.”

Unfortunately, CAFE not only hurts less fortunate Americans, the fact remains this regulations “are increasingly at odds with Americans’ preference for larger vehicles, including trucks and SUVs, which are generally less fuel efficient.”

It is possible that the unintended consequences arising from this policy have much to do with the fact that it was not designed as a climate policy, but as a national security policy at time when the country was striving for conservation and “energy independence” amid the shock of the 1973 oil embargo.

But, even if we pretend to ignore its origins, its impacts are too big to do the same.

Analysts have estimated that 3.1 million to 14.9 million households would not have enough credit to purchase a new car under the 2025 CAFE standards[PA1] [MR2] . And it’s not only consumers that are hurt. Ford CEO Mark Fields has estimated that 1 million jobs could be jeopardized by the rule.

With CAFE standards hurting the public as well as industry, while also achieving very little, one has to wonder why politicians keep pushing for such failed policy prescriptions. The answers appear to lie in the fact that the government thinks it can dictate what manufacturers produce and consumers buy without unintended consequences.

The bottom line is that taking away choices from individuals is never good policy. Closing down the possibility to own a car for millions of low-income American families in order to satisfy the whims of special interests and unelected bureaucrats isn’t just improper, it’s unacceptable.

The new administration has an opportunity to change course by relaxing the rule and allowing the market to perform its proper function. If It does, consumers, industry, and the environment will be better off than they are today.  And that’s smart public policy.