Lights Out in Puerto Rico—The Real Cost Of “Free Electricity” 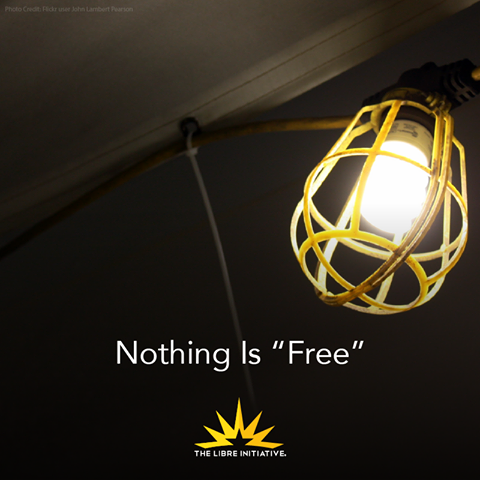 In the midst of the economic suffering caused by the Puerto Rican debt crisis, the people of the island are anxiously awaiting the light at the end of the tunnel. Unfortunately, that light – if it ever appears, is going to be extremely expensive. According to CNN Money, electricity prices in Puerto Rico are going up 8 percent this summer — and apparently that’s just the beginning. By early 2017, the government-owned Puerto Rico Electric Power Authority (PREPA) plans to increase rates 26 percent. The higher rates are expected to help the utility cover expenses while regulators consider broader reforms.

This unfortunately isn’t surprising: in other areas before, Puerto Rico’s politicians have resorted to raising taxes in order to tackle the revenue shortfall caused by lack of economic growth. Just last year Puerto Rico’s legislators approved a controversial increase of the territory’s sales tax in the hope of generating revenues to pay its creditors, bumping the rate from 7 percent to 11.5 percent. Forbes points out that the 11.5 percent rate is two points higher than Tennessee’s, which has the next highest rate at 9.45 percent, and one point above Chicago’s, which has the highest rate for a U.S. mainland major city.

Similarly, PREPA’s planned rate hike is another attempt to tax Puerto Rico’s fiscal problems away. Most importantly, it is a strategy that punishes the people of Puerto Rico for problems that they did not entirely create. From CNN Money again:

“PREPA was one of many government entities that borrowed far more money than it should have. The island’s electric utility is in desperate need of cash, which is why it proposed the rate hikes. In the meantime, it is also getting concessions from creditors by delaying payments to them and offering lower interest rates to some bondholders.”

As of February of this year, PREPA had piled up $9 billion in debt. While that is certainly a remarkable amount, the way that the debt was accumulated highlights even more unfairness in its recent plan to inflict more economic pain on the people on Puerto Rico. As reported by the New York Times, PREPA’s “free electricity” was one of the root causes. The electric power authority has for decades been providing free electricity to all of Puerto Rico’s municipalities – 78 in total – and many of its government-owned enterprises as a means to encourage economic development. The power authority even gave free power to some for-profit businesses. The market distortion caused by this policy spurred the creation of outlandish and wasteful projects. For example, in the municipality of Aguadilla, “free electricity” allowed for the construction of an ice-skating rink. But now the people of Puerto Rico are stuck paying the bill of this “free electricity” largesse.

When the government provides something for free, we often hear justifications for such policies as an attempt to bring fairness, equity or opportunity into society. The problem is this approach judges policies based on their intentions with little regard to the deeper unfairness that their long-term consequences might cause. How fair is it that — after decades of “free electricity” — PREPA recently cut electricity at two cancer clinics because of unpaid bills? Why doesn’t this government-owned entity continue, like it did for decades, to provide electricity for “free?” After all, aren’t cancer clinics more deserving than ice-skating rinks for tourists who want to experience the arctic at the tropics? Maybe if PREPA did not squander precious resources by providing free electricity to wasteful attractions, today they could keep the lights on at those cancer clinics. The lesson is that nothing is “free.” Even the government-owned PREPA could not escape this universal law. Once again, ignoring it is proving damaging for most, even fatal to others. Whenever we are told that some service will be “free,” we should be wary.  In the end, someone is surely going to pay for it. The people of Puerto Rico are about to learn that the hard way.