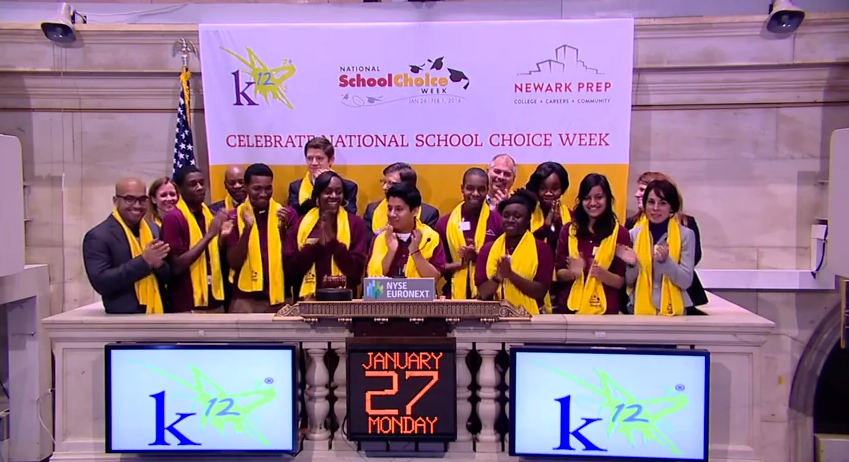 Students from K12's Newark Prep Charter School rang the opening bell
at the New York Stock Exchange earlier this week.
(Washington, D.C.) – The week of January 27 is National School Choice Week, which is intended to highlight the need for effective education options for all children. This nonpartisan public-awareness effort is planned by a coalition of individuals, schools, and organizations, and features thousands of events across the country. This year’s School Choice Week has already featured Members of the House and Senate reaching across the aisle to promote better educational choices for families, as well as the announcement by two Senators of new initiatives that would expand school choice.
The data show that the benefits of school choice are especially concentrated within Latino communities. Seven out of eight leading studies find that school choice moves students beyond the boundaries of their neighborhoods and into less segregated, more diverse schools – based on choices made by families, and not government mandates. In a 2013 analysis of learning achievement across 26 states, researchers at Stanford conclude that Hispanic students in particular have higher learning gains at charter schools versus traditional public schools. This translates to an average of 14 additional days of learning for reading and 22 days for math instruction for Latino students.
Daniel Garza, Executive Director of The LIBRE Initiative released the following statement:

“America has produced the world’s strongest economy for a variety of reasons – but one key has been our knowledgeable and skilled workforce. It encourages a redistribution of knowledge that results in expanded opportunities. Making sure today’s students get the best education possible will help ensure that the next generation competes for the jobs of the future, and at the same time improves our national competitiveness in the world marketplace.
That’s why we need to constantly strive to promote policies that improve education – and school choice can help accomplish that. It’s encouraging to see our leaders increasingly reaching across the aisle to expand educational options and build a better future for our kids. This is particularly important to Hispanic students, who make up 28 percent of the charter school population, and who benefit more from charter schools than do other students."