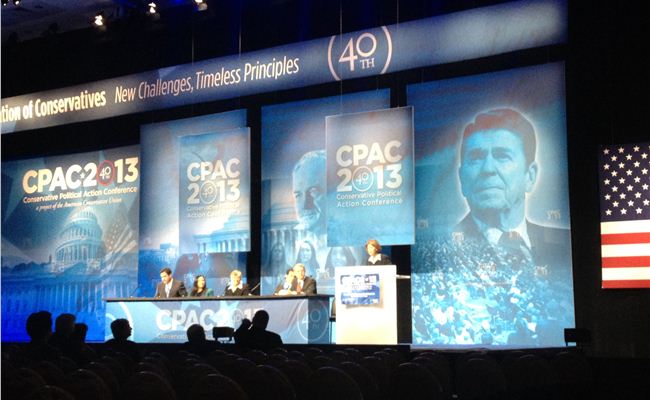 The event itself is organized by a Latino, the American Conservative Union’s chairman, Al Cardenas.

Two events addressed Latino issues: a five-member panel entitled “Respecting Families and the Rule of Law: A Lasting Immigration Policy” and an address by Alfonso Aguilar, director of the Latino Partnership for Conservative Principles, entitled “Expanding the Conservative Movement with the Hispanic Community.”

But there is much room for improvement.

While Aguilar’s address on reaching out to the Latino community included solid suggestions (“don’t wait until two months before the election”; “show Hispanics we favor small business”),a robust panel discussion – with Latinos of various nationality backgrounds,ages, and socioeconomic status – would have gone further in exploring this critical issue. Considering the amount of discussion amongst conservatives post-election (where Romney pulled a measly 27 percent of the Latino vote) regarding how to gain ground with Latinos, and in light of the RNC’s newly announced $10 million minority-outreach plan, should this not have been a panel discussion followed by a healthy Q&A? Should this not have taken place on the main stage, rather than relegated to a small conference room, at lunchtime, lasting a mere 15 minutes?

The panel on immigration, while featuring an impressive roster, failed to offer any clear consensus on how to proceed on immigration reform or even the particular panelists’ preferred path. Nonetheless,all the panelists seem to favor immigration reform and some sort of legalization of the undocumented. This was no surprise, as CPAC’s chief organizer, Cardenas, had previously expressed his support for the ‘Gang of 8’proposal, telling journalist Jose Diaz-Balart that CPAC was a key moment to stimulate conservative support for the plan.

Indeed, broadcasting from CPAC, Cardenas informed MSNBC’s Chris Matthews: “One of the greatest things we’re doing here is an immigration panel. You’d be amazed at the great… reception we’ve had on comprehensive reform, right here at CPAC – the epicenter of the conservative movement.”

Not so fast. Many attendees I spoke to expressed reservations, or outright hostility, about Rubio’s immigration proposal, with some saying the Cuban-American senator risks losing their support. And several of CPAC’s own key speakers were not on board.

At Thursday’s presidential dinner, Heritage President and former senator Jim DeMint stated: “We have to fix the system but we cannot design our national immigration policies to accommodate those who broke our laws. Granting citizenship to those who came here illegally violates the basic principles of freedom…. Amnesty and citizenship… only encourages more law breaking.”

The following morning, speaker Donald Trump blasted the idea of granting illegal immigrants citizenship, likening it to “a suicide mission” and noting it will hand the Democrats 11 million votes.

And, in her address Saturday afternoon, commentator and author Ann Coulter focused on her staunch opposition to “amnesty,”declaring she is now a one-issue voter against the measure. Curiously, Marco Rubio’s own address notably steered clear of any mention of the

matter, leaving some to speculate whether he cautiously did so to avoid any jeers from the conservative audience.

So, while it was a shining moment for Latinos at CPAC (delivering the keynote address and with Latinos featured throughout the three-day event), immigration reform remained not only a muddled message but also, perhaps most importantly, an issue of contention among participants.

A. J. Delgado is a graduate of Harvard Law School who writes about conservative politics and pop culture. You may find her on Twitter at @missADelgado