The Jones Act Has Got to Go 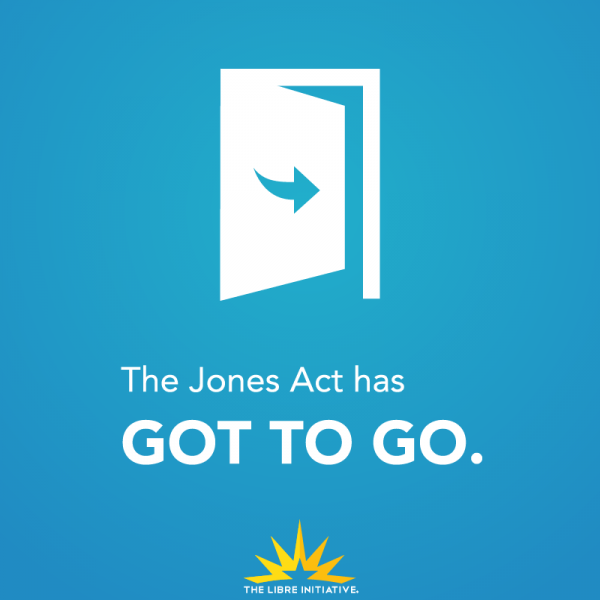 Puerto Rico is currently in a state of financial turmoil, with soaring unemployment, crushing poverty, and an enormous debt level of $72 billion. The U.S. island territory has defaulted on its most recent $422 million debt payment, and they show no signs of being able to pay their upcoming $2 billion payment on July 1st. At the moment, Congress is focused on finding ways to solve this looming problem, and has several proposals for how to do so. While they’re at it, if Congress wants to accelerate the rate at which Puerto Rico gets back on its feet again, there is another way to do so in addition to addressing the root causes of the debt – Congress needs to consider repealing the Jones Act.

Unless you live on an island, or are a member of the shipbuilding industry, you have likely never heard of the Jones Act. Also known as the Merchant Marine Act of 1920, the Jones Act is a U.S. federal statute whose stated purpose is to promote and maintain the American merchant marine – however, its current functional purpose is much different. The law instead primarily serves to artificially shield special interests such as American shipbuilders and unions from competition. Simply put, the Jones Act requires that all goods transported by water between two U.S. ports must be transported by ships that fit four qualifications: the ships must be made in the U.S., primarily owned by U.S. citizens, registered in the U.S., and have a crew of at least 75% U.S. citizens and permanent residents. In the U.S., the descriptor “transported by water” applies to goods transported across our inland rivers, the Great Lakes, and oceans – which is of course where Puerto Rico comes in.

The biggest problem with the Jones Act is that ships that are owned, built, registered, and crewed by Americans (like most American-made goods) tend to be expensive – much more so than their foreign equivalents. American crews cost nearly 4.5 times as much as foreign crews, and these costs are passed on to consumers.  This is all good and well for the shipbuilders unions, who promote the Jones Act, but this seemingly simple protection has the effect of raising prices for all of us – recent estimates show that a repeal of the Jones Act would save the United States as much as $682 million per year.

If you think this is bad for us on the mainland, imagine how much worse it is for water-bound Puerto Rico. On the mainland U.S., we get many of our goods delivered by train or truck, which have a lesser cabotage cost – Puerto Rico relies on ships for almost all of its trade with the mainland U.S., which means that the Jones Act adds to the cost of pretty much every single product the American citizens of the island need to buy. The restrictions have been particularly hurtful in the energy sector, and it’s estimated that the Jones Act raises the cost of gasoline by as much as 15 cents per gallon. High energy costs are particularly hurtful for a small economy, and they are felt by everyone from large businesses, to single-family households. Everything from common household items, cars, high tech goods, food, energy, and almost anything else that needs to be shipped to the island is more expensive than it should be thanks to the Jones Act.

While Congress debates how best to help Puerto Rico during this difficult time, they should look towards repealing the Jones Act as a step that would help mitigate the problem, and would be much more effective than a large bailout. Exempting territories from the Jones Act has successfully lowered costs in the past – the U.S. Virgin Islands was exempted from the law in 1992. Predictably, the cost of shipping goods to the Virgin Islands from the mainland is now nearly half that of shipping to Puerto Rico. The question of how to solve Puerto Rico’s debt crisis is a very complex one, and there will be no single magic-bullet solution to the problem. However, by taking steps to reduce the island’s inflated cost of living, Congress would be further helping the island along the path to financial recovery. Americans on both the mainland and the islands should agree – the Jones Act has got to go.