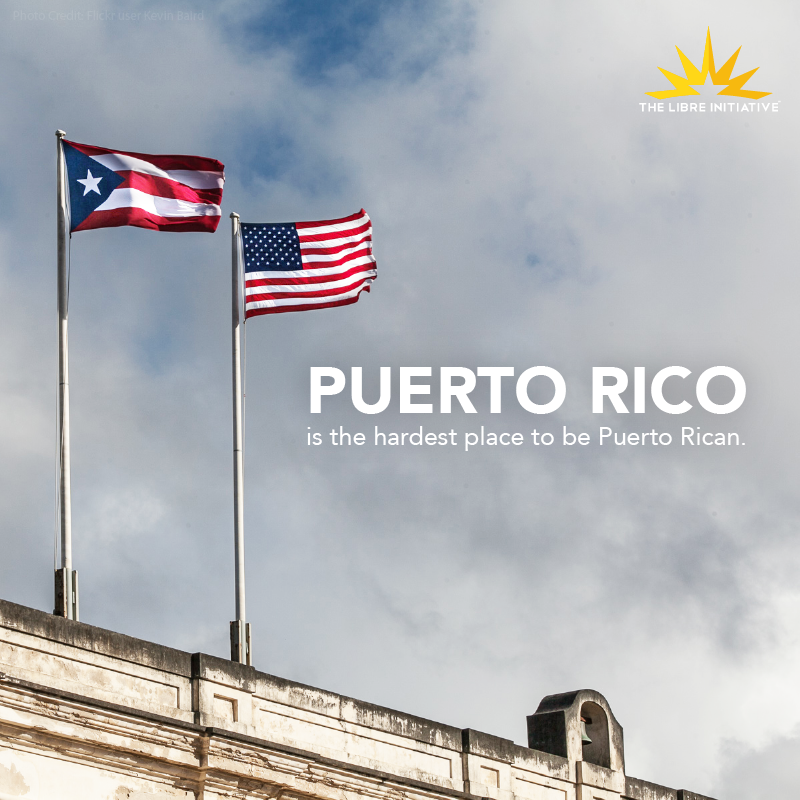 Puerto Rico’s bankruptcy isn’t just the largest municipal filing in the history of the United States, it’s the latest example of big government’s failed promises. The island is around $123 billion in bond debt and unfunded pension payments—more than six times what the city of Detroit owed when it filed bankruptcy in 2013. That’s around $34,000 in debt for every Puerto Rican resident.

A Tangled Web of Bonds

For decades, Puerto Rican lawmakers chose to borrow money instead of spending responsibly and balancing their budget. The island issued bonds to pay for everything, including day-to-day operations.

The result of fifty years of runaway borrowing and spending is a complex web of over $70 billion in bonds issued by various government agencies. As the debt spun out of control, Puerto Rico even began issuing bonds to pay back bonds they had issued in the past.

Puerto Rico’s teacher and public employee pensions are also in crisis. The funds are facing a $50 billion shortfall. Time after time, lawmakers have failed to make the necessary payments into the pensions.

In 2013, the island attempted to get the ballooning pension debt under control by raising the retirement age and increasing employee contributions. Since then, the government was supposed to put over $350 million into the pension funds. As of 2016, they had contributed $22.7 million.

The teacher pension fund is expected to run out of money next year. When that happens, payments will go directly to pay retirees instead of earning interest, leaving current teachers footing the bill for benefits they’ll likely never receive. The New York Times called the teachers’ pension fund “a legalized Ponzi scheme.”

Puerto Rico’s economy is in shambles, the result of decades of misguided corporate welfare programs from the local and federal governments. Almost half of Puerto Ricans live below the poverty line. Problems have only gotten worse as the island has raised taxes to try to manage the debt crisis. The official unemployment rate is 12 percent, but six in ten Puerto Ricans are either out of work or have given up looking for a job.

Puerto Ricans are leaving the island in droves. Over the past decade, Puerto Rico has lost ten percent of its population—around 440,000 people. In 2015 alone, the island lost 65,000 residents. More than 200 Puerto Ricans move to the mainland every day in search of better lives.

The “brain drain” is especially bad for high-skilled workers. The island is losing around a doctor a day as many leave for better jobs on the mainland. Those who stay say they can’t recruit health care workers to fill open positions, leaving long lines at hospitals and doctors’ offices.

Puerto Rico’s bankruptcy should be a wakeup call for legislators around the country, many of whom are dealing with growing debt and pension crises of their own. “Government-owned public corporations and tax subsidies for few selected businesses have been part of the economic development model for Puerto Rico since the 1940s,” Garza wrote.

“But it is now clear that this type of top-down approach, where government bureaucrats are entrusted to pick winners and losers in the economy, has ultimately brought only more misery and more government dependency to the people of Puerto Rico.”