Immigration reform: why this year is different 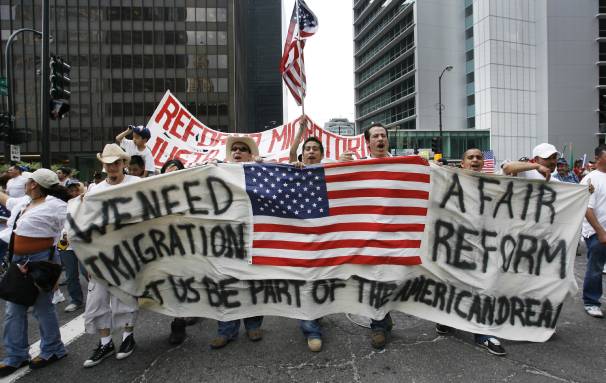 After weeks of debate and attention, we’ve reached a pause in the immigration reform debate. The Senate passed a comprehensive reform bill before Independence Day; the House has not acted. House leaders have made clear when they vote, it will be on a series of piecemeal bills.

Some observers think these efforts will founder — that the adjustment-first Senate leadership and the enforcement-first House leadership won’t compromise. That’s happened before, but both Republicans and Democrats have every incentive to make sure this year is different.

American voters send their representatives to Washington with the expectation they will put forward solutions to problems. Our broken immigration system is one of those problems — one that will only get worse. Each year hundreds of thousands of legal immigrants overstay their visas or cross the borders illegally. Each year the government fails to “connect the dots” when immigrants who would harm Americans enter the U.S. — or travel abroad for training. Low-skill workers continue to compete with millions who are here illegally, and see their wages depressed as a result. Young American citizens worry their families will be broken up because a parent or sibling is undocumented. How long will Washington ignore these issues?

When problems are not addressed — when they are allowed to fester — the solutions are rarely pretty. That’s true of immigration now. No one likes to be reminded of the challenges. No one is happy with all the proposed solutions. But waiting hasn’t made them better, and it won’t if we wait longer. Fortunately, many in Congress recognize that opposition to immigration reform is neither wise nor politically feasible.

Much has changed since the last time Congress seriously debated immigration, in 2005 and 2006. There are five reasons the effort is likely to succeed this time:

Presidential legacy: Every president wants to be able to point to major accomplishments during his watch. In his first term, President Obama passed health care reform, and chose to wait on immigration, a budget deal, climate change, closing the prison at Guantanamo Bay, gun control and others. Right now none of those looks likely to pass a divided Congress — except immigration reform. Once again, both the House and Senate are set to pass bills. It will take leadership to help bridge the differences. Obama has every incentive and obligation to provide it.

More grassroots supporters: The cause of immigration reform has gained many supporters in recent years. Groups like the Evangelical Immigration Table and many others recognize the unfairness of the system, and have contacted members of Congress to call for change. Along these lines, the LIBRE Initiative has launched the Estamos Contigo (We’re With You) campaign to make it easier for all supporters of reform to speak up. These new voices are an important balance to others on the right who oppose reform.

A weaker economy: Millions of immigrants used to come to the U.S. each year for economic opportunity. Unfortunately, that’s no longer true. Reforms in Mexico have led to a growing middle class and more opportunity for Mexican young people. We need to make sure that our immigration policy is market-driven and growth-friendly, and geared toward improving U.S. competitiveness.

Accountability: In 2007, there was a bipartisan effort to reform immigration laws. Then-Sen. Obama was part of the group working toward a consensus bill. But after a Democratic poison pill amendment was defeated, Obama changed his vote and joined conservative opponents of the bill to pass it. The amendment essentially removed one of the cornerstones of the bill, leading to its defeat. Back then, Obama was one of 100 senators; lots of people shared the blame. Now he is the president and the people who pinned their hopes on him expect more.

All these changes make success more likely this year than in the past. But people will have to stay engaged to make it happen. As long as grassroots groups like the LIBRE Initiative continue to call for Washington to fix our broken immigration system, we can succeed.

Daniel Garza is the executive director of The LIBRE Initiative and a former White House staff member. Follow him on Twitter

This article was published by the Richmond Times-Dispatch