(Washington, D.C.) –  The LIBRE Initiative continues to promote opportunity for Hispanics across America through efforts on the ground, as well as sharing perspectives on top issues facing our community.  Yesterday, Executive Director Jorge Lima published an oped discussing the negative impact of Seattle’s experiment with raising the minimum wage, and the subsequent drop in incomes of low-wage workers. The oped follows on earlier work on this topic by LIBRE, including a recent Facebook live discussion on the impacts of raising the minimum wage.

Additionally, The LIBRE Institute – the sister operation to The LIBRE Initiative – has published a study that examines the effects of the minimum wage on Hispanic employment and shows that Hispanics – like all Americans – are at risk of shrinking job opportunities following minimum wage hikes.

See below for a review of these efforts:

OP-ED | NBC LATINO: WHY WE SHOULD REJECT MINIMUM WAGE HIKE

By: Jorge Lima, Executive Director for The LIBRE Initiative<>

A few years ago, Seattle decided to raise their minimum wage laws. Supporters cheered saying it would do much to help the city’s least-paid workers. But now according to a new study, it turns out raising the minimum wage is having some unfortunate unintended consequences for the very people it was intended to help… The city of Seattle is providing the Latino community a cautionary tale of what happens when populist ideas take hold. As the “Fight for 15” continues its march in cities and towns across the country, the Latino community should stand firm to demand jobs – not short-term gimmicks. Read online here

By: David Barnes and Steven Cruz 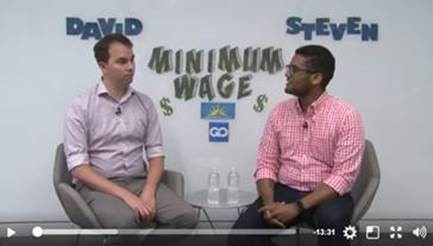 STUDY: THE IMPACT OF INCREASING THE MINIMUM WAGE

By: The LIBRE Institute

This report examines trends in the employment-to-population ratio of certain types of Hispanic workers-such as younger or less skilled workers-as they relate to changes in the minimum wage from 1974 to 2014, based on methodologies used in two previous analyses. From this analysis, we conclude that Hispanic concerns regarding the results of raising the minimum wage are well founded.