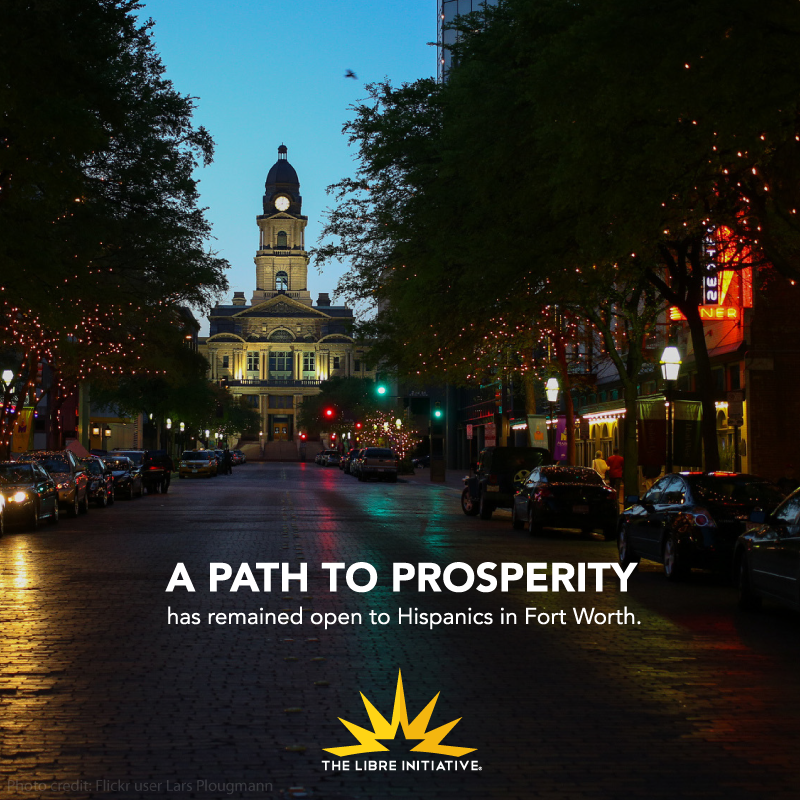 Shortly after Austin’s disastrous vote to impose costly regulations on ridesharing, the City Council of Fort Worth voted against a similar set of proposed regulations. In effect, Fort Worth decided to put faith in the free market to regulate the ridesharing industry. Technology is making our lives easier every day, and the emerging issue of how to regulate the sharing economy has taken the spotlight in many cities across America. Ridesharing regulations in particular have proven to be incredibly controversial. As companies like Uber and Lyft have begun to develop in large metropolises, they have been met by burdensome regulations that limit competition and protect established interests. For U.S. Hispanics, who depend on ridesharing for transportation and income every day, the Fort Worth model should serve as an example for regulations in the rest of Texas and the nation.

Not everyone in Texas has been so lucky. In cities like Houston and Austin, regulations have placed ridesharing companies in a predicament: stay and fight – or leave. Most recently, the city of Austin passed Proposition 1, which requires costly and unnecessary fingerprint background checks for drivers. After an expensive city election paid for by taxpayers, the vote to regulate ride-sharing has displaced over 10,000 drivers, who are now seeking employment or additional income. In Houston, Uber and Lyft have continued to operate even though local ordinances require a specialized license, which includes a fingerprint background check. Houston is the largest, most populated city in Texas, and stakes are high for ridesharing companies looking to stay and fight for one of the biggest markets in the state. Other major cities in Texas have passed similar regulations on ridesharing, including Corpus Christi, Galveston and Midland. However, San Antonio, Dallas and now Fort Worth have taken a different approach. These cities have chosen to embrace to growing industry.

The new Fort Worth ordinance will require companies to pay a $500 fee for an operating license that is valid for two years and complete a compliance certification annually. Instead of following the footsteps of overreaching local governments, Fort Worth decided to take the free-market approach. With an overwhelming 8 to 0 passage, the proposed ordinance is set to go into effect this fall. With its passage, drivers are now able to operate without facing hurdles and seeing “big brother” around every corner. With no surprise, the taxi industry was not a fan of the ordinance greatly due to the popular competition. Instead of listening to special interest groups, Fort Worth is now embracing all forms of transportation and the innovative market.

For Hispanics, a path to prosperity has remained open in Fort Worth. With fewer obstacles, Hispanics are able to sign up to drive, go through a screening process and be approved to be a driver. Hispanics make up 34 percent of the population in Fort Worth and are twice as likely to regularly use ridesharing apps compared to the general population. In stark contrast to Austin, Hispanics in the Dallas-Fort Worth area are now faced with fewer barriers to opportunity and more chances to succeed. Hispanics in Texas earn $42,396 in median household income, and any chance to receive a new revenue stream could be vital to pay household bills, debt, or to save for the future.

Technology advances year after year, and new innovations make our lives easier every day. As the sharing economy continues to create more value for society, elected officials are learning as they go. Cities like Austin, Corpus Christi, Galveston and Midland have placed stringent regulations on the growing industry, treating innovation as if it were guilty until proven innocent. For Dallas, San Antonio and now Fort Worth – city leaders have gone head to head with special interest groups. In these model cities, entrepreneurs don’t need permission to innovate. What will it take for others to follow suit?