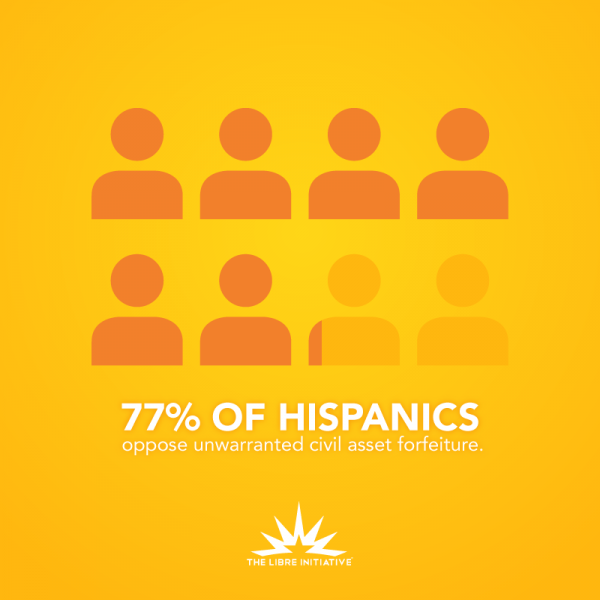 The 2016 elections are fast approaching, and voters are looking to support candidates who can eliminate barriers to opportunity and reverse the two-tiered society that is emerging in this country.  According to a new poll conducted by Drug Policy Action and Public Policy Polling, an overwhelming majority of voters across all parties and demographics in the key swing state of Florida would be more likely to support candidates who oppose civil asset forfeiture – a practice by which police are able to seize property from a person without convicting them of a crime. Policing for profit has taken hold of communities across America, and Hispanics are particularly affected.

According to the poll, nearly a quarter of all Hispanics in Florida say that either they or someone they know has had their property seized by police without being charged with a crime—a rate approximately four times greater than whites and African Americans.  Of these, traffic stops were the most commonly reported locations of seizures, where police have been able to seize cash, cars, and a wide variety of other possessions after simply pulling them over on the road. The wide impact of this practice has not gone unnoticed. Fully 77 percent of Hispanics in the Sunshine State oppose the seizure of property without charges. This majority opposition cuts across all demographics and political parties, and 66 percent of all voters in the state of Florida say they would be more likely to support political candidates who oppose civil asset forfeiture.

Prospective candidates and policymakers will have to tackle the problem at its root: incentives. Police departments across the country routinely engage in what reform advocates call ‘policing for profit,’ because the increase in caseloads has so far outstripped available funding that departments are becoming desperate for revenue. In some cities, policing for profit has gotten so bad that officers have issued fines for having mismatched curtains, walking on the left side of a crosswalk, and having holes in window screens. In many states, police departments are allowed to keep cash and valuables seized from citizens, and even sell them in order to buy equipment and other items for the department.

In order to reduce the incentive for policing for profit, a radical roll back of over-criminalization will be necessary. Far too many infractions have been elevated from civil to criminal penalties, putting a massive strain on police departments and the courts. In addition, police departments should no longer be allowed to keep the money and property they seize, but should instead be required to deposit the proceeds in the state’s general fund, so that individual departments do not have an incentive to seize property indiscriminately from innocent people. Above all, the whole practice of civil asset forfeiture should be abolished and replaced with criminal asset forfeiture. If the owner of the property is not charged or convicted of a crime, the property should be returned immediately.

“The notion that police officers can take cash or other property from people never charged with any criminal wrongdoing and keeping any profits from the sale of seized property doesn’t sit well with the public,” said Smith. “Voters want action on civil asset forfeiture.”