The Fiscal Point of No Return? Even Closer Than CBO Prediction 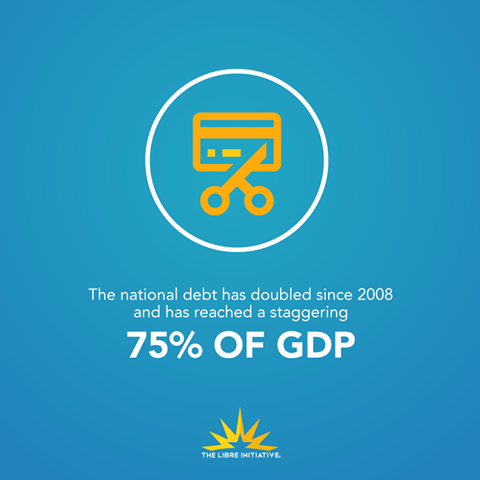 This week the Congressional Budget Office (CBO) released its annual snapshot of long-term federal spending and revenues. Unsurprisingly, the CBO’s projections confirm a trend that risks depriving future generations of Hispanics and all Americans of their opportunity to achieve the American dream. Our government is spending more than what it brings in, with no remedy in sight. The national debt (which, if you need any convincing as to why we should care about it, look here), has doubled since 2008 and reached a staggering 75 percent of GDP. It, will rise to 122 percent of GDP in 2040, a higher estimate than last year. This level of debt exceeds the historical peak of 106 percent that occurred just after World War II.

While the CBO’s findings show the need to rein in government spending and reduce the debt, they do not paint the full picture of our nation’s unsustainable financial path. As highlighted in a newly released comprehensive analysis by the Freedom Partners Institute, the CBO long-term projections provide information on public debt, which is a measure of all federal securities sold to “the public.” This type of debt is held by any investor outside the federal government, including foreign nations.

While analysts generally consider this measure to be the most relevant indicator in macroeconomic terms because it is the debt sold in credit markets, it excludes a growing type of debt known as “intragovernmental debt.” This type of debt includes money that the federal government owes to itself in order to pay for entitlement programs such as Medicare and Social Security, which have promised payments to recipients in the years ahead. Intragovernmental debt makes up almost 28 percent of gross debt, which takes into account money for entitlements programs and all other intragovernmental debt. By taking into account intragovernmental debt, the Freedom Partners Institute estimates that in just 15 years the national debt will more than double—from $19.3 trillion this year to an overwhelming $37.8 trillion. This projection is 23.5 percent higher than predicted by the CBO forecast.

As pointed out by Freedom Partners Institute, America’s future debt-to-GDP ratio could soon be on par with those of countries like Greece and Argentina at the time when they faced devastating sovereign debt crises.  Our situation is dire, and growing more so by the day. In order to fully grapple with the magnitude of the challenges brought about by decades of unsustainable spending, we need to fully understand what we’re up against. The CBO report doesn’t paint the full picture.