The Fight for a Living Wage 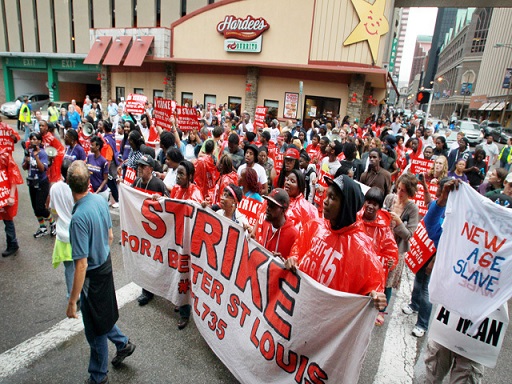 This week thousands of fast food workers staged a series of one-day strikes during peak mealtimes in seven cities across the United States. The campaign is pressuring fast-food chains to pay a “living wage” of $15 an hour.

Earlier this year, President Barack Obama called to increase the minimum wage to $9 earlier this year, but labor groups and protesters are demanding about double the amount they currently earn.

Stephanie Hernandez-Gonzalez, a former cafeteria worker in Texas, says that raising the minimum wage to $9 an hour would help, but that it’s still not enough to live on.

Hernandez-Gonzalez began working at a school cafeteria after her temporary administrative job ended. She says it was the only job she could find at the time. As an administrative assistant, she was earning $14 an hour, but at the cafeteria she was paid minimum wage– $7.25 an hour– and was only offered 20 hours of work per week.

“It was not enough for food or to pay my bills,” says the single mother of four children. And because she was working and receiving child support, Hernandez-Gonzalez says she was unable to get food stamps.

“I ended up losing my apartment and going house to house. It was really hard because I didn’t know how to handle making such little money. It was depressing. I couldn’t afford to buy groceries like I used to.”

The Bureau of Labor Statistics found that one in five Hispanics earns minimum wage while 23 percent of Latinos live in poverty.

Ana Guajardo, executive director of Centro de Trabajadores in Chicago, says that for many of her clients, the current minimum wage contributes to keeping households in poverty. One of the goals of Centro de Trabajadores is to organize workers to fight for their rights in the workplace and demand policies that will increase standards for immigrant workers. They are currently involved in the campaign to raise the minimum wage.

“The problem with the current minimum wage is that it doesn’t follow the inflation rate,” says Guajardo. “$8.25 is not enough. The price of food goes up. The price of living increases drastically, but salaries are not increasing.”

“The biggest consumers are the employees,” Guajardo says. “If they raise their wages, they can invest that money in businesses.”

Many opponents, however, believe that raising the minimum wage would negatively affect the job market. “In general, the government should not be setting wage rages,” says Daniel Garza, the executive director of the Libre Initiative, a free-market, center-right organization. Garza believes raising the minimum wage would shut people out of the job market.

“Only about 5 percent of workers earn minimum wage and 16 to 19 year olds make up 80 percent,” Garza says. “This [raising the minimum wage] would shut out teens from entry-level wages markets. Employers are unable to pay those rates and in the long run it will destroy job opportunities. Distorting the market could create a worse situation. We should be allowing the private sector to do what it does best.”

According to a 2011 study by the Federal Reserve Bank of Chicago, a dollar increase in the minimum wage results, on average, in households spending an additional $2,800 the following year. The Center for Economic Policy and Research has also found that increasing minimum wage doesn’t impact employment.

Guajardo says that several states have raised the minimum wage without any negative consequences. “We have to see the importance of this in order to fight for it,” she says. “We can’t depend on these low wages to sustain families.”