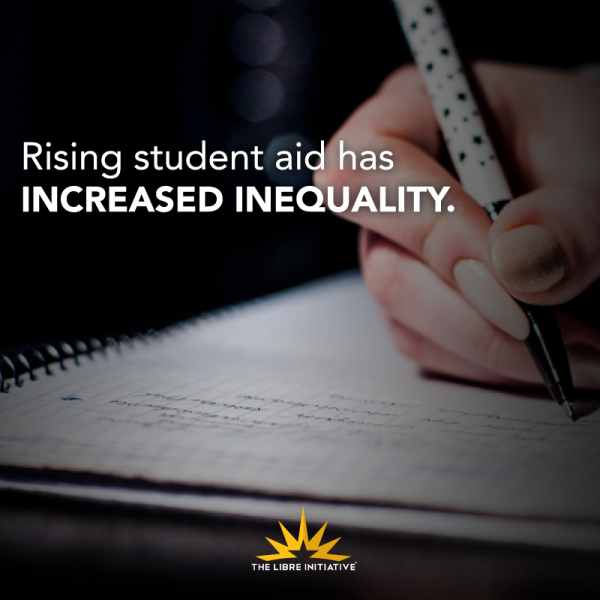 According to a new study published by the National Bureau of Economic Research, the vast majority of the increase in college tuition rates over the past 20 years has been caused by rising federal aid.  If higher education in the United States were influenced by the free market, we would expect costs to go down over time as a result of competition and innovation, yet in the current higher education system we have seen exactly the opposite.  Education is one of the keys to economic prosperity in the Hispanic community, and in the U.S. economy, college degrees are more important than ever. As the cost of tuition has continued to rise, affordability remains a significant barrier to Hispanic enrollment in higher education.    If policy makers want to make college more affordable for Hispanics, the facts are clear: handouts and subsidies make the problem worse, not better.

In the study, economists developed a quantitative model to test various explanations for the rapid increase in college tuition from 1987 to 2010, including changes in underlying costs, changes in the college earnings premium, and reforms to the federal student loan program to increase the amount of aid.  The study finds that while all of these factors are likely to contribute to rising tuition, reforms to the federal student loan program alone account for a 102% increase in tuition over the period under consideration.  This more than accounts for the 78% rise in tuition observed in the actual data, lending strong support to the notion that federal student aid is exacerbating the problem.

While the study is new, the debate over the role of federal aid in increasing college tuition has been broiling for a long time.  Legislators, left wing commentators, and even presidential candidates have all joined calls for more government intervention in higher education in recent years.  However, according to Chris Edwards, director of tax policy at the Cato Institute, higher education is already heavily subsidized, and increased aid could lead to lead to spiraling costs and increased income inequality.

“More subsidies would boost tuition inflation at colleges in a vicious spiral upwards,” Edwards explained to the Daily Caller News Foundation. “Besides, more college subsidies would increase income inequality by aiding future lawyers and accountants at the expense of people who don’t attend college, such as truck drivers.”

As the cost of tuition has continued to rise, affordability remains a significant barrier to Hispanic enrollment in higher education.  According to Pew Research, 66% of Hispanics who got a job or entered the military directly after high school cited the need to help support their family as a reason for not enrolling in college – almost double the figure reported for the white population.  As a result, only 15% of Hispanics between the ages of 25-29 hold a bachelor’s degree or higher, compared to 40% of whites in the same group.

For U.S. Hispanics, the findings of this recent study underscore the importance of a free market approach to making higher education affordable.  Increased subsidies over the past two decades have only led to inflationary spirals in tuition, resulting in a higher education system that remains out of reach for many of the people who need it the most.  The facts are becoming clearer every day: the answer to America’s student loan and college tuition crisis is not to throw more tax dollars at the problem.  Policymakers should pay attention.