For the first time in many years, the island nation of Cuba has seen widespread public protests directed against the ruling regime. The leadership in Havana has responded with force and repression.

It is impossible to predict what will happen next, but these protests may have a lasting impact not only on the future of Cuba, but also on the lives of many who have been forced to flee from that nation over the years.

Below are answers to some questions that The LIBRE Initiative team has been hearing a lot since these protests began.

What is happening in Cuba? 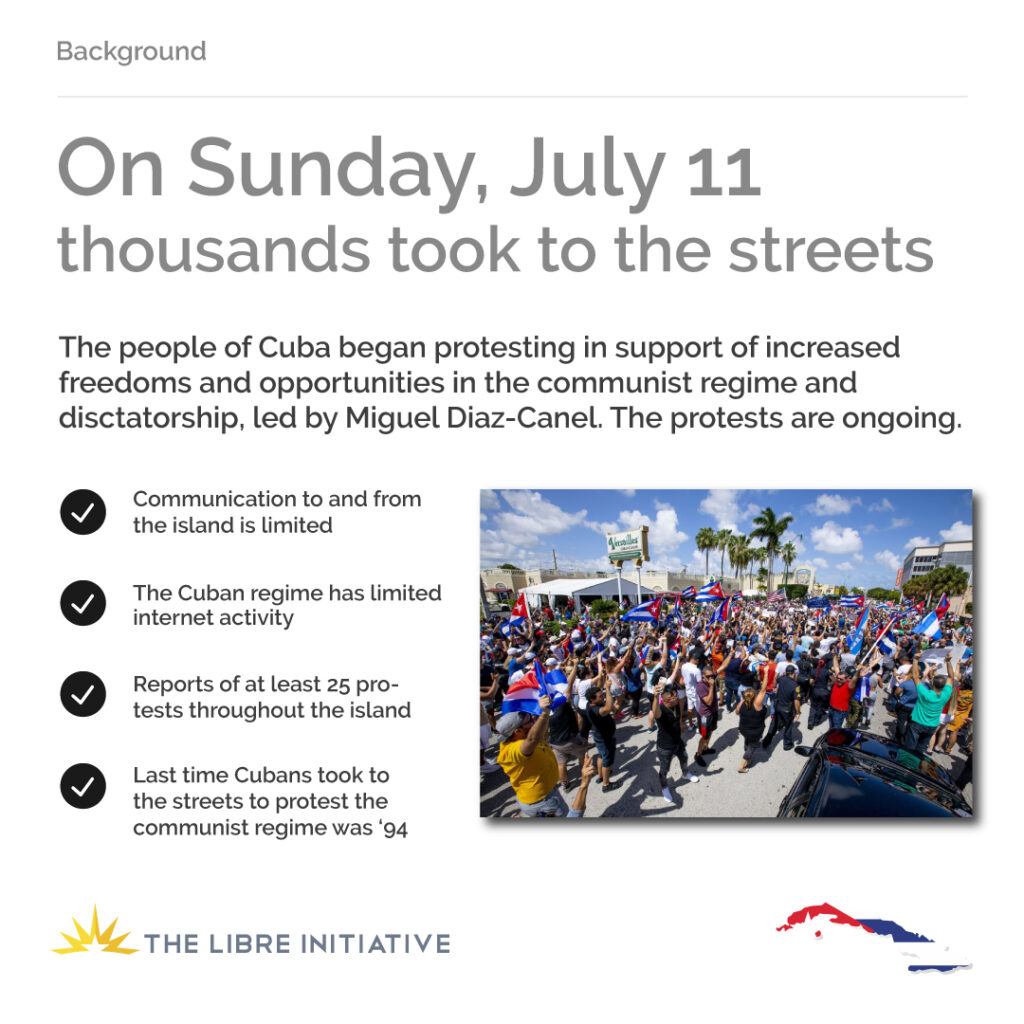 On July 11, thousands of Cubans took to the streets in cities and towns across the island nation to protest in support of increased freedoms and opportunities.

The protests against the communist dictatorship led by Miguel Diaz-Canel are ongoing, although communication to and from the island is limited as the regime in Havana has limited internet activity.

These displays of anger and frustration are being exacerbated by the COVID-19 pandemic that have been causing massive shortages of basic necessities. Protestors are also demanding medicine, vaccines, and food.

The last time Cubans took to the streets to protest the communist regime at a level like this was in 1994.

That uprising took place only in Havana and was quickly put to an end by leaders who forced an exodus by opening maritime borders. Thousands of dissidents were forced to leave in makeshift boats.

Why is it happening? 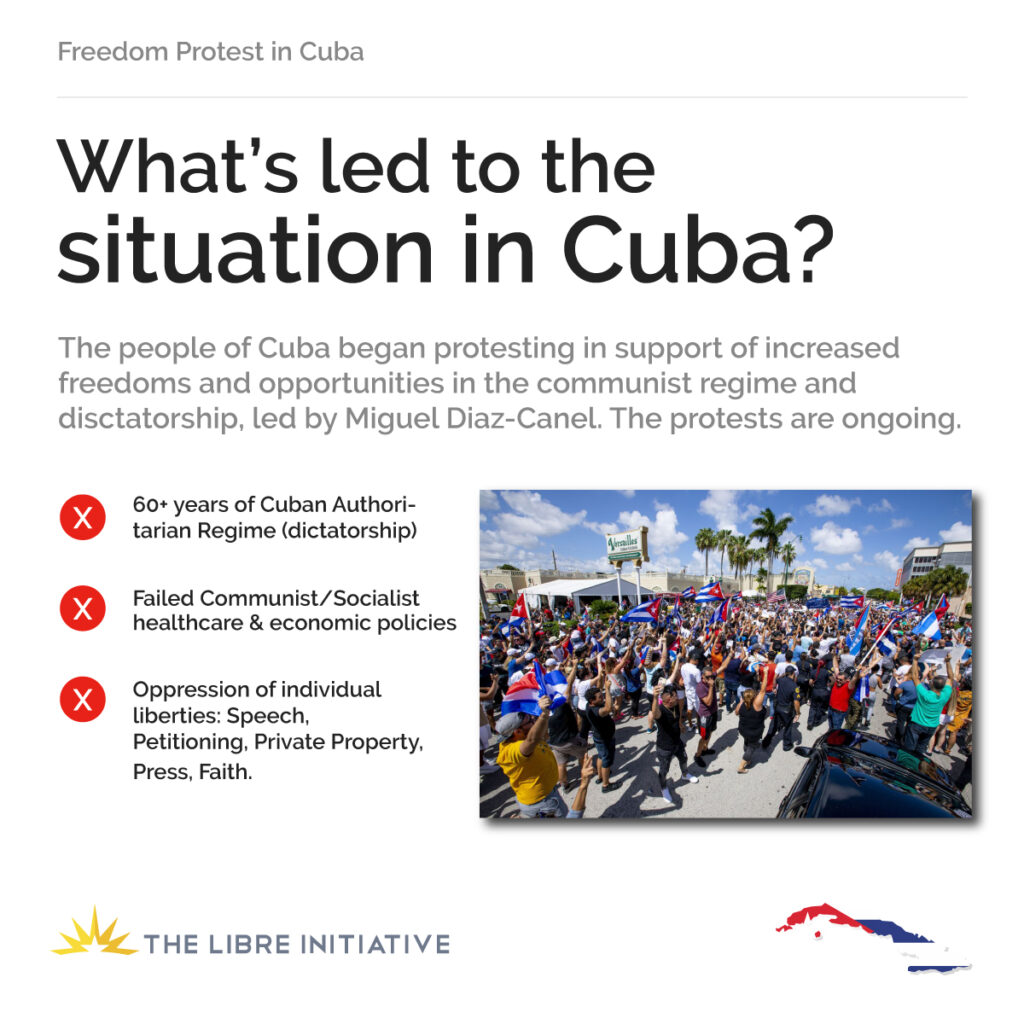 For more than 60 years, the people have suffered under a communist regime that relies on cruelty and repression to deny fundamental human rights.

While the rulers have changed, the tactics have not.

Because it denies fundamental liberties – including rights of speech, faith, the press, property, and commerce – Cuba wallows in poverty, unable to generate prosperity.

Instead of relying on the consent of the governed, the regime in Havana has held power thanks to a combination of brutality and the support of foreign powers.

What can the United States do?

For decades, the citizens of Cuba have been denied fundamental human rights and the opportunity to shape their own destiny. Even before the establishment of the ruthless and repressive regime that still runs the country, the voices and rights of millions were denied.

In the more than six decades of communist rule, authoritarians have relied on foreign governments – and not the Cuban people – to maintain a stranglehold on power.

The United States should stand up for the rights of Cuban citizens to determine their own path, with a government that represents their own wishes and views, and to reach out to freedom-loving people and countries throughout the world.

What is the view of The LIBRE Initiative? 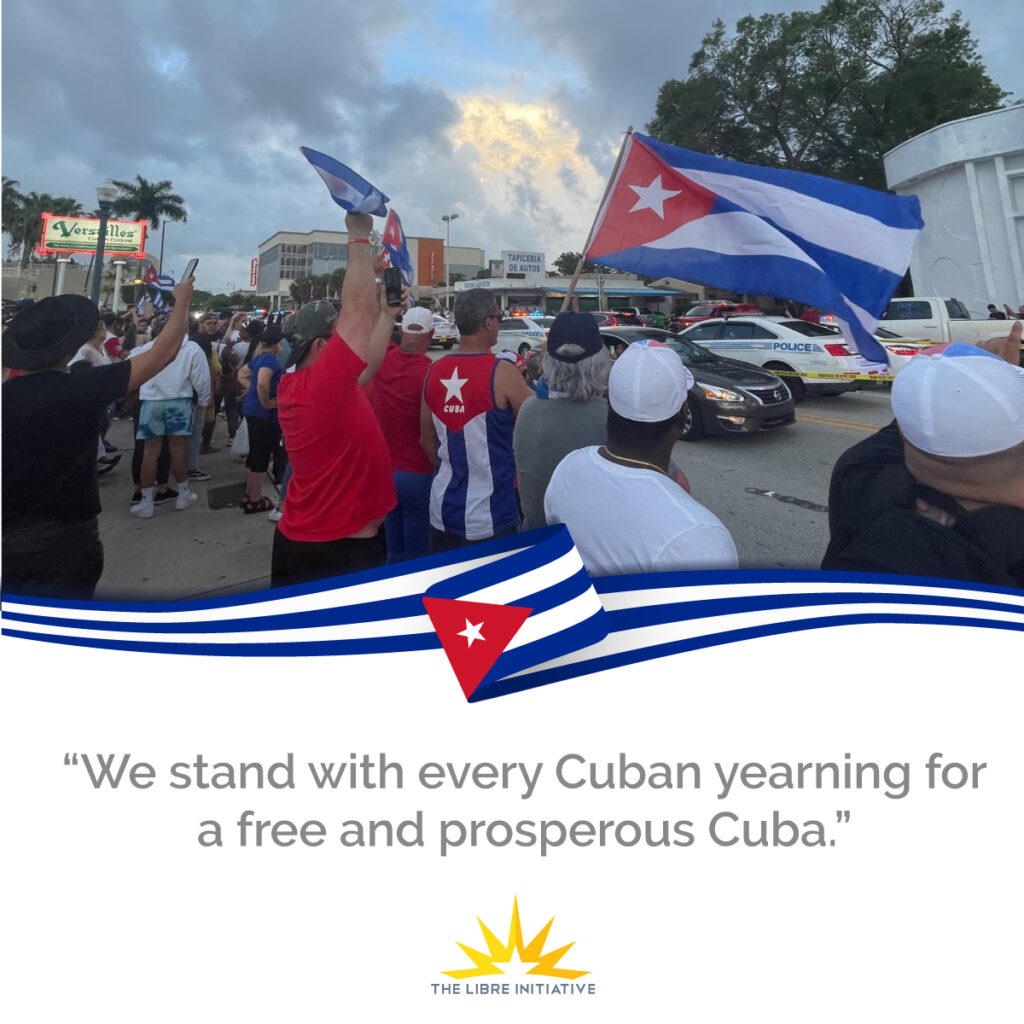 We stand with every Cuban yearning for a free, prosperous, and independent Cuba.

We join with those calling for systemic changes that help establish a political system that respects fundamental human rights, including free speech and expression, representative government, and property rights, among others.

The activists of The LIBRE Initiative are helping to elevate the voices of those calling for this change, in protests, public communications, and other means.

We join with patriots in Cuba, as well as those whose families were forced to flee the regime, in calling for change.

That’s a question that must be answered by the regime in Havana. No dictatorship can survive indefinitely against a populace that stands united against it.

Eventually Cubans will have a pluralistic government that respects individual rights and encourages its citizens to pursue their own dreams and prosperity. Millions in the United States and around the world support the people in their demands for reform.

Rather than insisting on further violence and bloodshed in an attempt to hold power, the Diaz-Canel regime should choose to initiate the change that must eventually come.

Advocate a free and prosperous Cuba with our social media toolkit.

Learn more about the protests in Cuba and the response from The LIBRE Initiative.