Discussion, Not Denial, Is How to Deal with Immigration Reform 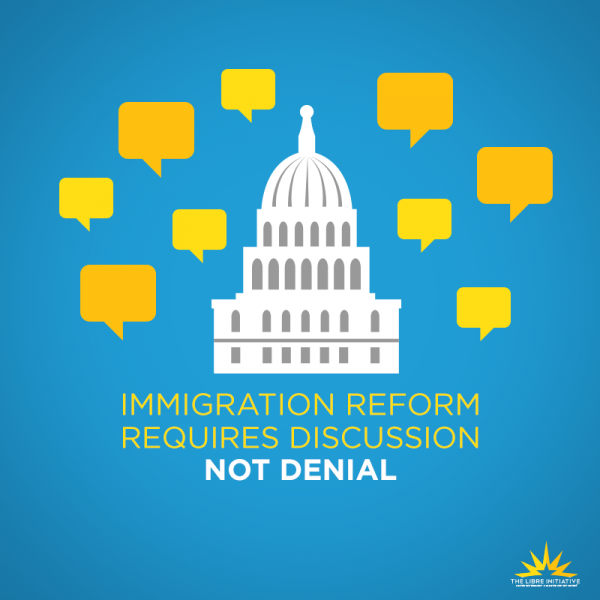 The effort to pass bipartisan immigration reform legislation is stalled for the time being, due in no small part to the gridlock present in Washington. Unfortunately, this seems to be the new normal in politics – Congress and the President are increasingly characterized by both an unwillingness to work across the aisle, and a lack of bipartisan trust when it comes to addressing key national priorities.  Nowhere is this more visible than on the issue of immigration.

The division in the House of Representatives was especially apparent in recent weeks, when the body went through a period of disruption while searching for a new Speaker. Paul Ryan was able to get the shaky support of the House GOP, but this support did not come without costs. Some worried members demanded Ryan sign off on a letter promising that he will not even bring immigration-reform legislation to the House floor while President Obama remains in office, unless a “majority” of the GOP members will publicly support it – something that unfortunately, in a pre-election year, is overwhelmingly unlikely.

This measure is the wrong way of going about resolving a policy issue as important as immigration – Congress and the President need to find a way to work together, because immigration reform will not be permanently fixed without bipartisan legislation enacted in Congress.

The lack of trust between Congress and the President on the question of immigration reform is not without reason. The President’s past executive actions may have been well-intentioned, but they had the effect of polarizing Washington by showing a refusal to compromise. Instead of coalescing with Congress around areas of agreement on sensible immigration reform, the White House chose to circumvent the normal legislative process and imposed arbitrary, legally perilous executive measures, even though this went against the wishes of the American people. America cannot have a unilaterally-acting president who continuously disregards Congress if we are expecting to make any real progress.

However, the White House’s circumvention of Congress does not mean that Congress should respond in kind by putting a moratorium on immigration legislation. The fact remains that immigration is a very important issue to many Americans, with 71% of American adults and 73% of Hispanics reporting that it is extremely important or very important to them personally that we have better laws dealing with immigration. That includes laws governing how immigrants can come into this country, and laws dealing with immigrants already in this country. Opinions on how we should tackle the problem of immigration are varied, however, with 46% of Hispanic registered voters agreeing that creating a pathway to citizenship for undocumented immigrants should be the top priority in dealing with unauthorized immigrants, while 38% believe that establishing better border security is equally important.

Still, the fact remains that most agree that this issue needs to be dealt with. The United States is currently home to around 11.3 million undocumented immigrants, and we all deserve some kind of certainty regarding their future status in the United States.

Washington must address these needs, promote growth by matching willing workers with employers, and improve enforcement of the law. However, there is no way that Congress will be able to achieve this without an open, honest discussion of what is best for this country and the people living in it.

Instead of demanding assurance that the new House Speaker will not introduce immigration reform legislation under the current President, Congress needs to realize that attempting to stop discussion on a divisive topic is no way to reach a desperately-needed solution.