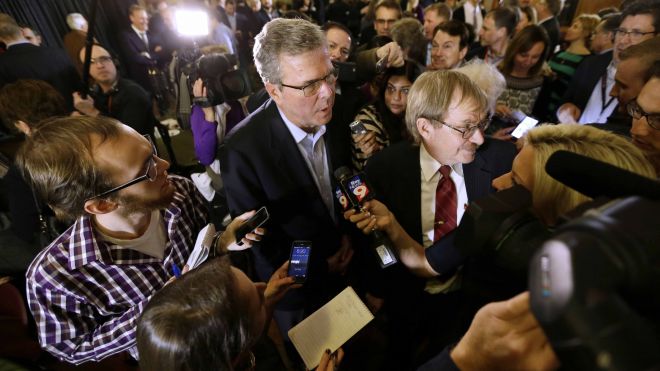 On Sunday, former Florida governor Jeb Bush was approached by a “Dreamer” “” an immigrant brought to the U.S. as a child, without legal authorization. With cameras running, Bush was asked if he supports President Obama’s executive orders on Immigration , which defer deportation for Dreamers and others here without documentation. Bush called for permanent fixes on Immigration – while likening Obama’s unilateral actions to those of a Latin American dictator, untethered from democratic constraints.

For immigrants who’ve fled true dictatorships, that answer sounds harsh – but Bush was alluding to something that they, more than anyone, have seen the consequences of first hand. Namely, imposing unilateral edicts when the legislative body doesn’t go their way has been the Default approach of autocratic regimes. And President Obama’s unilateral actions of late are precisely the kind that have caused so much damage to public institutions and to the trust people have in their governments across Latin America.

While there were bipartisan efforts in Congress to advance legislation intended to resolve the legal status of millions of immigrants currently “living in the shadows,” President Obama – after years of inaction – acted politically, choosing to impose his own administrative action against the expressed will of Congress. This was a stunning flip-flop for a president who had said many times that he lacked this authority – until and unless Capitol Hill acted.

The backlash was immediate; 26 states sued President Obama for overstepping his Constitutional authority. As a result, a Federal District Judge issued an order prohibiting the U.S. Citizenship and Immigration Services (USCIS) from accepting applications for the Deferred Action for Parents of Americans and Lawful Permanent Residents (DAPA) program.

While the District Judge ruled that the White House has legal authority to prioritize among deportations when forced to adapt to Budget constraints, his disapproval centered on the President’s actions to deliberately bestow benefits in the form of work permits, going far beyond his executive authority. Now consideration of the case is complicated further by word that the White House has already approved a three-year deportation deferment for about a hundred thousand applications under the new executive orders.

It’s popular for political analysts to say “Washington is broken,” and throw up their hands as if this is just one of those things. But there’s a reason Washington isn’t working, and there are serious costs that go with it. A unilaterally acting president who continuously disregards Congress hurts our national security and our economy. It hurts hard-working families, and it damages the America we are handing down to our kids. We the people should not accept it. Part of that is recognizing that when the president gives up on trying to work with Congress and instead decides to go it alone it makes it harder for Washington to enact real solutions to serious problems. When Congress refuses to debate and vote on Immigration , or an annual Budget resolution, there is a cost.

We count on the president to lead. Instead, governing by executive fiat has not only helped polarize the three branches of government, but it has served to complicate the possibility of achieving badly needed relief for millions. Americans and immigrants alike had hoped the president would lead on permanent, bipartisan Immigration reform in his first year in office. Instead it seems they’ll have to wait until 2017.

While many people like myself are committed to working even harder to achieve legislative reform – whether it comes in the form of a path to citizenship or a worker visa program – the President’s ill-advised, capricious actions put many like us in the difficult position of having to oppose a measure that would provide temporary deportation relief to a group that desperately needs it. But we do it, because we know that this temporary, partial measure flaunts the will of Congress and is not the right answer – its constitutional soundness is ambiguous at best, flat out unlawful at worst.

Which brings us back to Governor Bush’s remarks. When executive actions are clearly in opposition to the law and the intent of Congress, it undermines our system of representative government and infringes on our Constitutional arrangement of checks and balance. According to polls, even a majority of Latinos are concerned that the president’s actions would alter the checks and balances of our country.

Regardless of where each one of us stands with respect to Immigration reform, it’s clear that taking matters into your own hands isn’t the right answer “” it leads to unintended outcomes that don’t work for anyone. Nobody knows that better than members of the Latino community who fled autocratic governments.