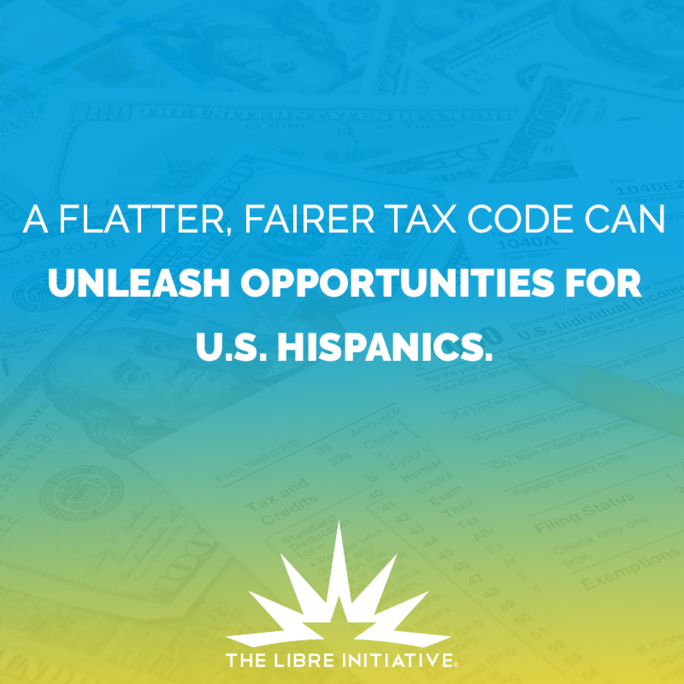 For the better part of the last decade, many Hispanic business owners struggled to get ahead. With the last presidential administration bent on imposing costly financial regulations, burdensome healthcare mandates, and mountains of red tape on everyday Americans, it’s no wonder the economy slugged forward at such a slow pace. But all of that could be about to change, as Congress considers comprehensive tax reform to make the tax code simpler, more efficient, more equitable, more predictable, and less burdensome. For the over 3 million Latino entrepreneurs in the United States whose businesses keep our economy going, comprehensive tax reform is certain to bring much needed relief.

Under the proposal being advanced by the White House, taxes on businesses would be lowered to 15 percent, down by more than half from the current 35 percent rate.

“We’re pleased to see the 15 percent business rate,” says Brad Close of the National Federation of Independent Business, to USA Today. “We think it’s a great way to kick-start the small business economy.”

Small businesses employ approximately half of all American private sector workers, making their success critical to the success of the American economy. The Latino community, perhaps more than anyone else, appreciates this reality. In fact, there are more than 4 million Hispanic-owned businesses in the United States, and Latino entrepreneurs continue to start new businesses at a faster rate than the rest of the nation. In many cases, these Latino entrepreneurs are already hiring and growing successfully – over 40 percent of job-creating Hispanic businesses have more than 50 employees. While Congress weighs changes to our nation’s complicated, burdensome, and outdated tax code, the livelihood and wellbeing of these vital contributors to our economy hangs in the balance.

In tax reform, our elected representatives in Congress should follow five basic principles to ensure that reforms unleash economic growth and opportunity for U.S. Hispanics and all Americans. First, policymakers must simplify the code by lowering rates, reducing the number of brackets, and eliminating special loopholes and deductions in order to make compliance as easy and affordable as possible. Second, reforms should improve efficiency by establishing a broad-based, low-rate tax system that collects revenue with the least possible disruption to the economy. Taxes should also be equitable, eliminating harmful corporate welfare and special interest handouts that are contributing to the emergence of a two-tiered society in America. Fourth, policymakers should make taxes more predictable by eschewing any further short-term extenders or temporary patches. Finally, comprehensive tax reform should not include any new burdens on the American people, such as the disastrous Border Adjustment Tax that now appears to have been dropped from consideration.

There is no question that all Americans – including the Hispanic community – stand to benefit from reforms that simplify our tax code and reduce the burden on workers and small businesses. If leaders in Washington work together on tax simplification that reduces the burden on entrepreneurs, workers, and families, it is all but certain that our economy will be stronger and our people will be more prosperous.