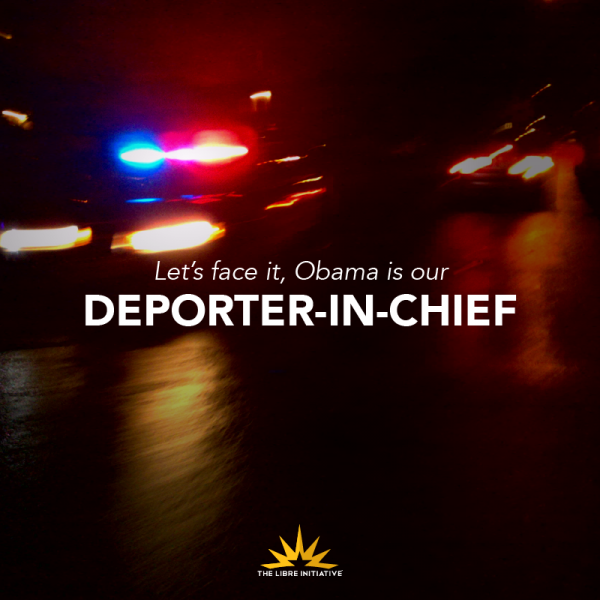 The Obama administration began to execute a large-scale immigration crackdown this past weekend, as federal agents raided the homes and businesses of unauthorized Central American immigrants and their families in Texas, Georgia, and North Carolina.  The raids, which could affect an estimated 12,500 immigrant mothers and their children, is the latest move in a long pattern of playing politics with immigration that has characterized the President’s administration since he took office in 2009.  Despite crafting a public perception as a friend to immigrants, the President has taken a far harsher stance than his predecessor, and is living up to the title given to him in 2014 as our Deporter-in-Chief.

For a president who has conversely styled himself “Champion-in-Chief” on immigration, Barack Obama is either hypocritical or plainly unaware of his own record.  Over the period spanning his first year in office until 2014, President Obama saw to the deportation of nearly 1 million people from the interior of the United States alone – nearly double the number removed during the last six years of the previous administration.  In total, President Obama has deported more people from this country than any other president before him, and has now almost deported more than every president from the 20th century combined.

Despite public perceptions to the contrary, the Obama administration has always been aggressive when it comes to deportation.  What has driven the dissonance between public perception and reality is really a difference in tactics.  While the Bush administration employed mostly media-friendly raids by Immigration and Customs Enforcement, the Obama administration has instead preferred to use local law enforcement as a dragnet.  The former was flashier and more intimidating, but the latter has yielded significantly more deportations.  The President can be Deporter-in-Chief or call himself Champion-in-Chief, but he cannot have it both ways.

Instead of constructively engaging with the issues, the Obama administration has often played politics with immigration.  At Vox, Dara Lind has suggested that the current wave of raids on homes and businesses is partly a reaction to a recent surge of unauthorized crossings toward the end of 2015.  However, the raids are targeting Central American families who have arrived since the beginning of 2014 and who have not appeared in court, or otherwise failed to prove to courts that their home situation was severe enough to warrant asylum.  If the surge in arrivals in 2015 was due, as Lind suggests, to a worsening of the violence and crisis in Central America, then there is a grave irony in the fact that 2014 arrivals will be deported as a result.  If the latest surge of unauthorized immigrants is due to a worsening of the situation in Central America, the families previously denied asylum on the basis that their home situation was not severe enough will be deported to a region that has grown even more dangerous since those refusals were handed down.  In this case, as in many others, the priorities of the Obama administration have more to do with politics than reality.

Without a doubt, crossing the border illegally is a crime, but to devote more efforts to deport a group of peaceful migrants without legal residency over the thousands of violent criminals who have yet to be deported from the country is a troubling development.  According to the Economist, the deportation machine is expensive, costing more than all other areas of federal criminal law enforcement combined.  If the current wave of raids is an indication that the federal government needs to narrow its time and resources on enforcing our immigration laws in a specific way or on specific groups, focusing that effort on the deportation of families and children instead of violent criminals is a perversion of priorities.

In a free society, the rule of law should be applied uniformly, and resources should be allocated accordingly, rather than at the whim of political pressures.  Immigration policy is no different. If a prioritization of resources and focus needs to take place, shouldn’t our immigration policy prioritize the deportation of criminals that impose costs on our society rather than devoting increasingly scarce resources to crackdowns on economic migrants and asylum seekers to the detriment of everyone?  President Obama invited this confusion and ambiguity by acting out of step with Congress, yet he wants to be viewed as a friend to immigrants. While he continues to style himself our Champion-in-Chief, all too often the record of his administration has revealed him to be far from it.  He cannot have it both ways.