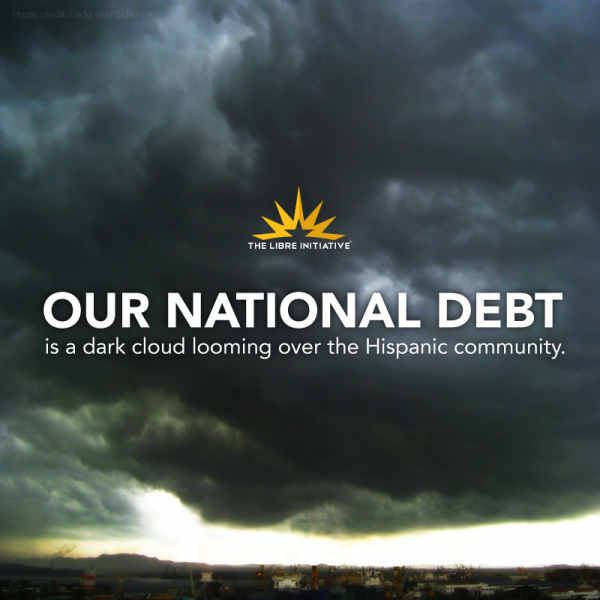 Last week, the U.S. national debt reached a new record high of $19 trillion. Put in perspective, this number represents $59,000 dollars per person living in the U.S. These numbers may sound shockingly astronomical, but they should hardly be surprising. Just last month the Congressional Budget Office (CBO) said that the annual budget deficit is projected to rise by over $100 billion this year – to more than $550 billion – and exceed $1 trillion by 2022. The growth of the national debt looks increasingly like a slow motion train wreck, one that is poised to have negative repercussions on Hispanics. The U.S. Census projects that the Hispanic population will double from 53.3 million in 2012 to 128.8 million in 2060.  Consequently, future generations of Hispanics will be the ones to inherit much of our ballooning national debt – and will have to repay it.

The CBO warned us that the deficit would increase debt held by the public to a staggering 76 percent of GDP by the end of 2016—about 2 percentage points higher than it was last year and higher than it has been since the years immediately following World War II. And as the debt-to-GDP ratio rises, so does the risk of a fiscal crisis.

As noted by the Committee for a Responsible Federal Budget, about half of the deterioration in the fiscal outlook announced by the CBO comes from legislative changes enacted by Congress, mainly December’s unpaid-for tax extenders and omnibus spending legislation. The Omnibus includes funding for virtually the entire federal government through the end of the fiscal year. In this case, Congress and the White House deliberately chose to add to the deficit instead of finding a more fiscally responsible path. In fact, the Omnibus’ passage was made possible by the Bipartisan Budget Act of 2015 in November, a law that was designed to raise the caps on discretionary spending established by the 2011 Budget Control Act by $50 billion for fiscal year 2016 and $30 billion for fiscal year 2017. As is usually the case in Washington, politicians failed to stick to what was promised, and changed the rules of the game to allow more spending. To make things worse, according to an analysis by the Mercatus Center, the Omnibus was also a vehicle for a series of more than questionable spending provisions. These include $81 million for the U.S. Department of Agriculture to help with marketing of certain agricultural commodities. But as reported in the Mercatus analysis, these marketing services, which include a news service and support in promoting their products, leave the taxpayer with a burning question: why is all of this not paid and administered by the benefiting producers?

While we wait for Congress to answer this and other questions regarding how exactly they spend taxpayer money, it is essential that Congress realize just how catastrophic their actions will be. If this type of irresponsibility continues—and if there is no sign of it stopping anytime soon—the national debt will continue to grow past the point where these games are sustainable. As the CBO explains in its latest report, the large amount of federal debt will ultimately draw money away from private investment, cause higher taxation, and even compromise our national security by constraining defense spending in times of international crisis. This reality is undebatable, and the CBO has been warning us for some time now. Congress should heed the warning and act now by balancing the federal budget and reforming our largest entitlement programs so that they are strengthened and made sustainable for future generations. Until this job is done, politicians should stop increasing discretionary spending by breaking their promises they have made to the American people.