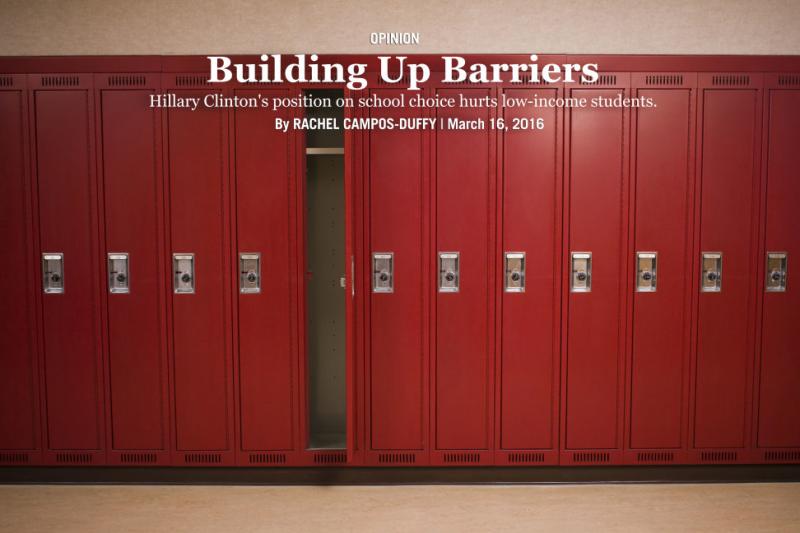 Last month, presidential front-runner Hillary Clinton unveiled a new agenda she promised would tear down barriers to opportunity for low-income and minority communities. While she was able to garner a few headlines, it doesn’t change the fact that she opposes the surest way to give children the best shot at a better life: expanding school choice and access to charter schools.

I say that as a Latina mother of seven who has taken advantage of educational options for my own children, and who has seen school choice policies improve thousands of lives in my home state of Wisconsin. It has clearly worked for Hispanic families in Florida, Nevada, Arizona and elsewhere.

Charter schools in particular have proven a lifeline for millions of children stuck in chronically failing schools. That’s especially true in some urban areas where fewer than one-in-three students are proficient in reading and writing. For these children, charter schools are their only chance to escape a life of hopelessness and poverty.

Clinton hasn’t always been so opposed. In fact, as first lady, she was a strong supporter of the charter school movement. During a 1998 White House meeting, she advocated that “charter schools are a way of bringing teachers and parents and communities together.”

But as a presidential candidate, Clinton has flipped to a steadfast opponent of school choice, making no exception in the instance of failing traditional public schools. As she put it last year, “I want parents to be able to exercise choice within the public school system – not outside of it.”

As a mother myself, I cannot imagine a more heartless response to the millions of children whose lives depend on access to charter schools. No child’s future should ever be dictated by what zip code they were born in. Yet with their families lacking the resources for a private school education, they are left with no choice but to carry on in despair.

Clinton herself chose private school for her daughter, as did our current president for his daughters. For someone who speaks so often about leveling the playing field in America, shouldn’t opportunity and parental choice in education be the privilege of all Americans, and not just the elite, wealthy and well-connected?

All of which makes Clinton’s “breaking down barriers” agenda ring hollow. As years of evidence show, charters are the best shot at providing low-income and minority children a better life.

The educational benefits speak for themselves. A 2015 study from Stanford University’s Center for Research on Education Outcomes found that urban-area charter school students – 95 percent of whom are minorities in some urban areas – receive the equivalent of 28 extra days of reading instruction and 40 days of math every single school year.

This translates into higher educational achievement. Compared to traditional public schools, a 2014 study by Mathematica Policy Research found that charter students are between 7 and 11 percent more likely to graduate high school. Similarly, a 2011 RAND Corporation study found charter high school students were 8 to 10 percent more likely to enroll in college than their peers.

Unsurprisingly, parents have been yearning for more access to such high-quality education. From 2009 to 2012, the most recent year for which data are available, the Center for Education Reform reports that waiting lists grew by 19 percent. As of this month, there are more than 6,800 charter schools serving nearly three million students across the country.

More impressive still is that charters have achieved these successes with less than two-thirds of the public funding traditional public schools receive. That’s billions of dollars a year less in public funding to produce better educational outcomes, shattering the argument by Clinton and others that our schools are failing because they are underfunded. [Charter schools do receive private funding.]

Yet despite this overwhelming evidence, Clinton is steadfast in her opposition. She instead stands with the national teachers unions and other obstructionists who argue that charter schools are only successful because they cherry-pick the best students.

That argument is simply untrue. Most charter schools admit students by random lottery, making it impossible for them to pick only the best. And when students are admitted, they are more likely to stay there. A 2015 report from the New York City Independent Budget Office, for example, found “students at charter schools stay at their schools at a higher rate than students at nearby traditional public schools.”

It’s a shame we even have to have this debate, but is typical of the status quo that puts special interests above the interests of our children. Parents and grandparents ought to understand the importance of making sure the next generation excels – and charter schools have proven extraordinarily successful nearly everywhere they’ve been tried.

Clinton will never truly tear down barriers to opportunity until she tears down her own opposition to giving all parents the choices and opportunities she gave her own daughter.