The Best Way to Hurt American Industry? Deport Its Workers. 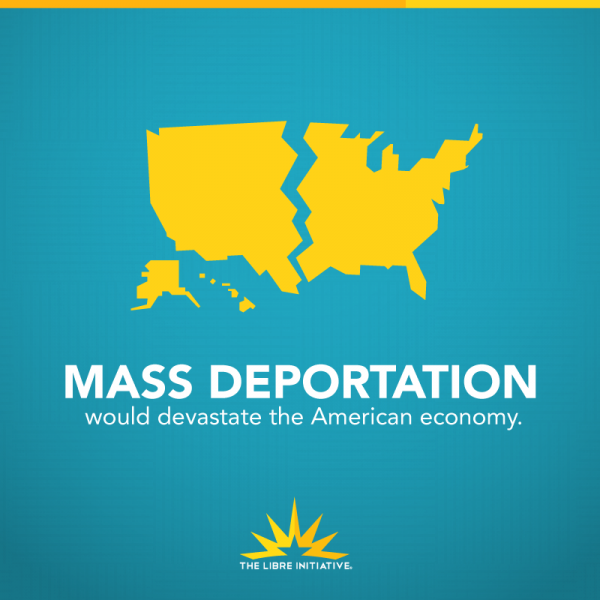 Want to hurt American industry? Then you should deport all unauthorized immigrants, according to a new study done by the American Action Forum. Currently, policymakers are still debating how to deal with the issue of unauthorized immigration, and proposals have varied. One of the more extreme policies proposed is the idea of mass deportation, or the idea that we should deport all of America’s unauthorized immigrants in a short time frame. There are many reasons why this is neither a practical nor desired outcome for our country, but one of the biggest problems is the fact that it would severely harm our domestic industries – and the consumers and workers who depend on them – right here at home in America.

Deporting all unauthorized immigrants would be a huge, costly undertaking that would drastically increase the size of government. It would also have the effect of harming native-born Americans by severely hurting our economy and our domestic industries. Removing all undocumented immigrants is projected to cost taxpayers anywhere from $400-600 billion – this by itself is nothing to shake one’s head at. However, the larger cost would not be from the complicated and expensive task of removing people from the country, but instead would come from the economic effects that would result. Removing all undocumented workers from the U.S. – around 5.1% of the labor force – would shrink real GDP by a projected $1.6 trillion dollars; equivalent to almost the entire GDP of Texas.

There is also a significant impact if we look specifically at private sector labor decline. The impact on each industry varies, depending on the extent to which unauthorized immigrants participate in a given industry. However, as a whole, removing all unauthorized immigrants from our country would directly result in private sector labor declining by anywhere from 4 to 6.8 million workers, and as a result, private industry output alone would fall between $381.5 billion and $623.3 billion dollars.

This decline would be particularly pernicious in immigrant-heavy industries, such as construction and agriculture, both of which make important contributions to the U.S. economy. Unauthorized workers remain more heavily concentrated in these industries – in 2012, 62% held service, construction, and production jobs, twice the level of U.S.-born workers. In these and other Hispanic-heavy industries, the unemployment rate is often close to the national average rate, which suggests that there are not enough available, unemployed, native-born workers to take the place of the millions of deported undocumented immigrants.

Even if native and lawful foreign-born workers did replace all unauthorized immigrants up until 5.1% (the overall average unemployment rate in 2012, the period which the study examined), then private sector employment would still decrease by about 4 million workers. This decline in labor would lead to a consequent decline in output in immigrant-heavy industry sectors. Construction industry output would fall by around $32.3 billion. The agriculture industry? Losses of $16.4 billion. And this data was measured using the higher 2012 unemployment levels – since 2012, unemployment rates have fallen, and today fewer industries have unemployment rates above the long-run natural rate. Therefore, today there are even fewer available unemployed native and lawful foreign-born workers to replace their undocumented counterparts. The study acknowledges that we do not know how many new workers would enter the workforce (unemployment rate only counts those who are currently looking for work), and these discouraged workers could possibly minimize the pernicious effects of mass deportation. However, with the current available numbers, there are simply not nearly enough native and lawful foreign-born workers to make up for this huge reduction of labor.

Mass deportation policies are costly to implement, are costly to enforce, and are harmful to our economy. America currently depends on the labor of both authorized and unauthorized immigrants, and suddenly removing a large section of workers would undoubtedly have negative effects. Policymakers must address the millions here without documented status in a way that will not cost billions of dollars and further cripple American industry.