The American Dream That Almost Wasn’t 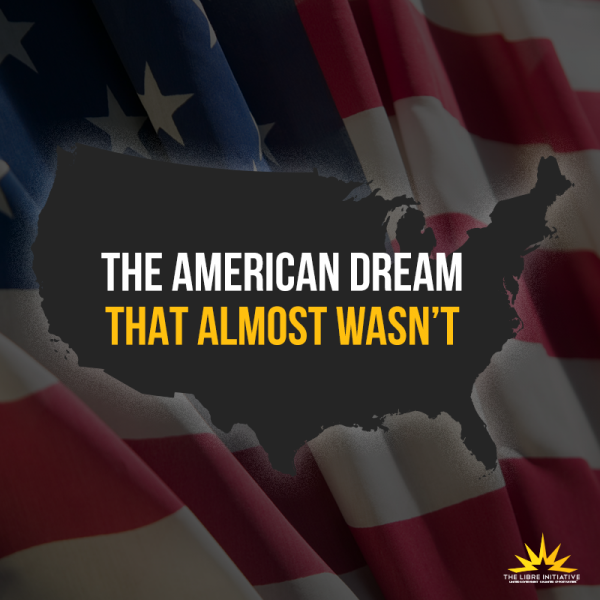 This Hispanic Heritage Month, we have celebrated the rich heritage of the Hispanic community and the American Dream, and how Hispanics are claiming that dream today.  We have commemorated the history of migration to the United States, and reflected on the reasons that have brought Hispanics to this country.  For centuries, people from all over the world have journeyed to the United States in pursuit of freedom, and this migration continues today.  America has always been a nation of immigrants, and every generation has experienced struggles for acceptance as they search for freedom and the American Dream.  A look back at our heritage will illustrate that it had to be fought for, and at one point was almost lost. But, just like today, freedom did and can save it.  Whether your ancestors crossed the Atlantic or the Rio Grande, the heritage of all Americans is the heritage of freedom.

America’s history of immigration goes right back to its beginnings in the colonial era.  Four hundred years ago, the first English settlement in North America was established at Jamestown, in what is now the state of Virginia.  While the land was rich in natural resources, the settlers struggled to survive.  Most were expected to work for years and contribute the fruits of their labor to the common good.  They endured famine, harsh winters, and deplorable conditions; by 1609, hundreds had lost their lives.  Shortly thereafter, a new governor arrived in the form of Thomas Dale.  Dale put into place a number of essential reforms that have been credited with saving the fledgling colony, but none perhaps were more important than the institution of private property.  No longer were the settlers to depend solely on the common good, but every man was given three acres of land for himself and his family, and they were encouraged to provide for themselves.  As Virginia historian Matthew Page writes, the result was revolutionary:

“As soon as the settlers were thrown upon their own resources, and each freeman had acquired the right of owning property, the colonists quickly developed what became the distinguishing characteristic of Americans – an aptitude for all kinds of craftsmanship coupled with an innate genius for experimentation and invention.”

As a result of the market system, food and wealth became more plentiful, living standards rose, and the first tiny settlement became a success.  In the centuries that followed, subsequent waves of immigrants would come to America in the pursuit of this same opportunity.  Nearly a million Irish immigrants crossed the Atlantic at the beginning of the 19th century, and though they faced intolerance and persecution in their new home, acceptance eventually came, and America grew stronger because of it.  Italian immigrants soon made the same journey, and many more people of other nationalities were quick to follow.  Today, the millions of Hispanics who come to the United States are the modern day heirs to this legacy.

As we wrap up Hispanic Heritage Month this year, we should take time to reflect on the history of this search for freedom.  The nations of Latin America continue to see their freedoms eroded and their prosperity dwindle, and new generations of Hispanics have come to the United States to build their own futures.  Today, Hispanics are a vital and growing part of our economy.  The 4.1 million Hispanic businesses that call America home are growing the economic pie every year, and will contribute an estimated $661 billion in 2015.  Even in the wake of a weak economic recovery, Hispanics continue to have the highest labor participation rate of any group in America.  For centuries, the United States has been a refuge and a homeland for people all over the world who value freedom, hard work, and self-reliance.  In 2015, the lessons of Jamestown ring truer than ever.  In those days, freedom was what saved the American Dream, and in the present day freedom can save it again.  This Hispanic Heritage Month, we should remember this: no matter where we come from, we share the heritage of freedom.