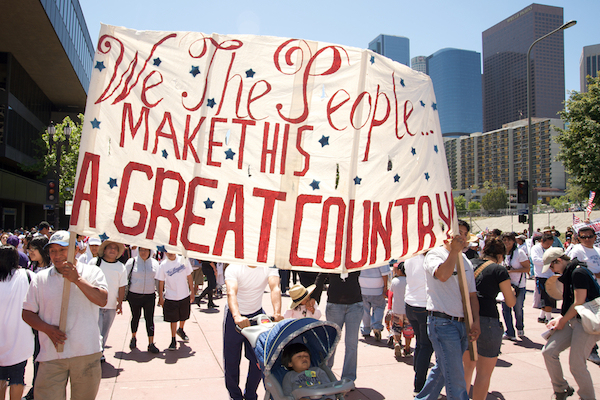 While Obamacare and the disaster known as Healthcare.gov are in the national spotlight, there is another issue that hasn’t left the minds of millions of Americans. Set to be next on the national agenda,immigration is still a major area of concern. There is no denying that immigration evokes emotional responses from those on all sides of the debate. However, sometimes a handful of people can sour the discussion for everyone involved.

Planned by the Young Conservatives of Texas (YCT) at the University of Texas at Austin, their “Catch an Illegal Immigrant Game” is a prime example of a response to the immigration debate that is a lose-lose.  The event was set to be held on Wednesday, November 20, 2013 and the premise was that students around campus would be designated “illegals.” If you caught an “illegal” and brought them to the YCT table, you would receive a $25 gift card.

It was a childish idea that contributed nothing productive to the national debate and only served to offend people across the nation. There is no room for such tactics in the national debate over an issue that affects the daily lives of those from coast to coast of this great nation.The group claims that the event was meant to provoke discussion on how illegal immigration hurts Americans. Unfortunately, the event seems to have done more to offend and stir up controversy than start productive discussions.

The event ended up being cancelled and in its place a pro-immigration reform rally was held.  Attended by hundreds, the student speakers talked about pushing for immigration reform and ending hurtful rhetoric. Many culturally based student groups were in attendance to voice their opposition to the “game.”

It is important that conservatives of all stripes quickly and explicitly denounce actions like this – perpetrated by a few – lest they taint the entire movement. YCT did not conceive this event out of liberty-minded principles – for conservatism calls for approaching immigration reform from a market based perspective.

If YCT had held an immigration forum instead, and approached the broken system from a free-market viewpoint, the YCT students and those asking for immigration reform might have been able to reach some common ground. An event like the one YCT proposed could only cause controversy and hard-feeling, making it harder to enact any type of reform.

This is why The LIBRE Initiative, a non-partisan and non-profit organization dedicated to spreading the principles of economic freedom, launched the Estamos Contigo campaign.

The campaign calls on legislators to take up the task of reforming immigration using market based solutions that will lead to a stronger economy.  Specific actions called for include lifting the caps on visas and a legal path to work for those that are already here, as well as improved enforcement of our immigration laws.

It is also imprudent to continue turning away the best and brightest from other countries who yearn for their chance to achieve the American dream because of an arbitrary number of visas set by politicians in Washington, DC. Universities in the United States have been unable to produce enough U.S. born Science, Technology, Engineering, and Mathematics (STEM) field graduates to satisfy the industries operating in our country.Americans from all political persuasions should be able to agree that a less bureaucratic system that is employment-driven will lead to less illegal immigration and a more robust economy. We know that while immigrants who come to the United States do find employment, their needs also create jobs as there is not a finite pool of jobs.  At a time when unemployment is so high, the United States cannot afford to ignore immigration reform.

LIBRE supports a policy that gives high-tech companies the incentive to do business in the United States by providing unlimited visas for the best and brightest foreign-born doctoral and master degree STEM graduates from American universities who wish to work in the United States.

In accordance with family values, it makes no sense to punish children brought here, through no fault of their own, for transgressions of their parents. Millions of these “Dreamers” have grown up with America as their only home and they simply want to work here and start families here – as Americans. They can contribute to our economy and it is contrary to conservative family values to suggest deportation which would only expand government powers and costs.

Immigration reform, if done from a market based perspective, will be beneficial to the entire country. Thus, it is important not to let the hurtful rhetoric or actions of a small group become a major setback. Instead, take a minute to do your part and tell those fighting for immigration reform, and a stronger economy, “Estamos Contigo.”